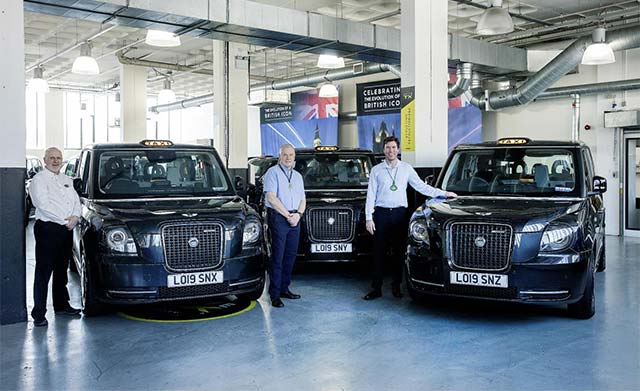 The London cabbies who played a vital role in testing the new LEVC TX electric taxi on the streets of the capital liked it so much they have now purchased their own vehicles.

Since October 2017, LEVC has been conducting a testing programme that has seen London cabbies putting the new cab through its paces in a real-world environment and over that time they have racked up over 130,000 test miles.

Known as the Capture Test Fleet (CTF) programme, it followed on from LEVC’s global TaxiDur vehicle durability programme which saw TX prototypes travel more than one million miles across the world, from the Arctic Circle to the Arizona Desert.

Combined with final phase London-based testing, no other taxi can claim to have undergone such a rigorous development programme.

With the highly successful CTF activity now at an end, elite London cabbies Peter Powell, Patrick Follen and John Dowd have purchased their very own TXs on the basis of how well the vehicles performed and recently collected these from LEVC’s London dealership in Brewery Road.

Peter Powell added: “I was recruited on to the CTF programme in early 2017 and drove early TX prototypes from October of that year. I have found it particularly satisfying to spend the vast majority of my working days using pure EV throughout my whole shift. I make a point of topping up the charge when I can as zero emissions are my preferred choice. With the range extender you have the added bonus of not suffering with range anxiety and being able to accept a job of any distance even if low on battery range late in your shift.”

Patrick Follen said: “In July 2017, I was invited to take part in the CTF test program and the moment I saw the first prototype I couldn’t wait to get started. I knew at the end I would definitely be buying a TX. The first thing that strikes you is how smooth and quiet it is, which is why the passengers love it so much. Working in the TX is also much less stressful.

“Myself and two other CTF drivers took part in a ‘Stress Test’ conducted by Professor Duncan Williams of York University and the results concluded that driving the electric cab is less stressful than a conventional diesel. It just makes driving in busy London, a lot easier.”

John Dowd commented: “There are so many benefits to TX, but for me the comfort is in a league of its own. Having driven the previous diesel cabs for years and being more than six-feet tall it has been a revelation. With the TX, I’ve got all the room in the world and given that we spend so much time in our cabs, that’s paramount.”

Alan Clark, Engineering Director for LEVC, said: “TX was put through some of the most rigorous and harsh testing conditions in the world to ensure that this vehicle was ready to meet the demands of the taxi trade, not only in London, but all over the world. Peter, Patrick and John played a crucial role in this testing process a really pleased that they have gone on to purchase their own TXs – it’s testament to the quality of the vehicle.”