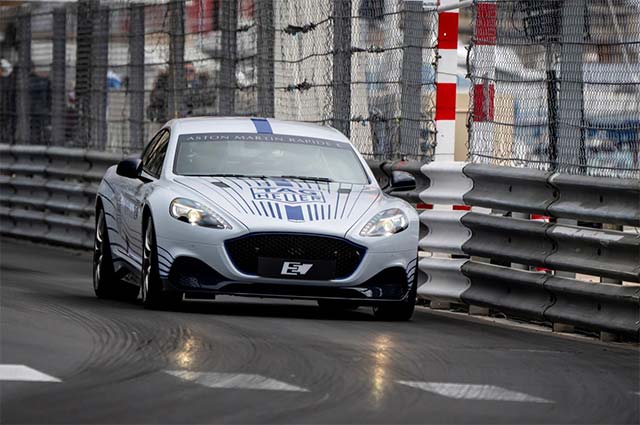 Taking part in two dedicated on-track sessions throughout the day, the British luxury marque’s revolutionary new model was put to the test by Aston Martin works driver and three-time 24 Hours of Le Mans winner Darren Turner. Billed as the most powerful Rapide model ever, the car’s twin rear-mounted electric motors deliver a combined target output of 612PS and a colossal 950Nm torque and Rapide E didn’t disappoint as it showcased its performance credentials on the circuit.

Rapide E is powered by an 800V electrical architecture battery – encased in a carbon fibre and Kevlar casing – with a 65kWh installed capacity using over 5600 lithium-ion 18650 format cylindrical cells. This bespoke battery pack lies where the original 6.0-litre V12, gearbox and fuel tank were located, with the 800V system allowing for more efficient charging and greatly improved thermal characteristics over existing electrical architectures.

Darren Turner said following today’s drive, “I’ve had the privilege to join the Aston Martin engineering team at various stages of the car’s development and the performance that’s on offer in Rapide E really is incredible. The car has the kind of torque and punch that you’d expect from an EV, but they’ve really worked hard to retain the dynamic characteristics of what makes an Aston Martin special. Today feels like a real milestone in this company’s history and for me to be the first person to drive an all-electric Aston Martin publicly is an absolute honour, particularly here in Monaco”.

Dr Andy Palmer, President and Group CEO Aston Martin Lagonda added, “Rapide E is a defining product in Aston Martin Lagonda’s history. We have set out a bold strategy for the electrification and hybridisation across the Group and this product demonstrates that we have the capability to deliver an EV of exceptional performance, while still delivering the qualities demanded of not just Aston Martin customers, but the wider luxury market. As the world’s first all-electric luxury brand, Lagonda will directly benefit from the technologies and experience derived from the Rapide E programme. Darren (Turner) is very lucky to have had the chance to demonstrate what Rapide E can do and I firmly believe that those who have already placed their name down for this special model, will be able to take pride in seeing the car run in anger for the first time”.