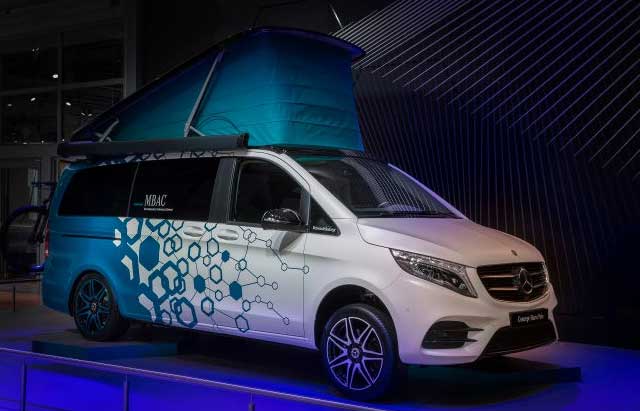 The “Concept Sprinter F-CELL” showcases the idea of an environmentally friendly and sustainable camper van as a key trend that is driving the The concept vehicle demonstrates that emission-free operation is possible for campers thanks to a fuel cell powertrain.

Yet the vehicle is not just free from pollutant emissions, but also almost silent. Long distances are not a problem: a range of up to 530 kilometres along with an output of around 147 kW (198 hp) makes it possible to realise the dream of a beach holiday in the south just as much as one in the Norwegian fjords.

When developing the concept vehicle, Mercedes-Benz Vans benefited from the synergies of the Daimler Group while specifically adapting the technology of the GLC F-CELL, which is equipped with an innovative combination of fuel cell and battery-electric powertrain. The GLC F-CELL was presented as a preproduction model at last year’s German International Motor Show.

The intelligent interplay between battery-electric and fuel cell powertrain gives the “Concept Sprinter F-CELL” a maximum output of around 147 kW (198 hp) with a torque of 350 Newton-metres. The three tanks in the underbody can hold a total of 4.5 kilograms of hydrogen for a range of around 300 kilometres. If a longer range is required for a specific purpose, the hydrogen tanks in the vehicle’s underbody can be supplemented by another tank in the rear. This configuration increases the range to around 500 kilometres. The “Concept Sprinter F-CELL”, too, unites innovative fuel cell and battery technology in a plug-in hybrid. This means that, in addition to hydrogen, electricity can also be used for operation, which further increases the range by up to 30 kilometres. 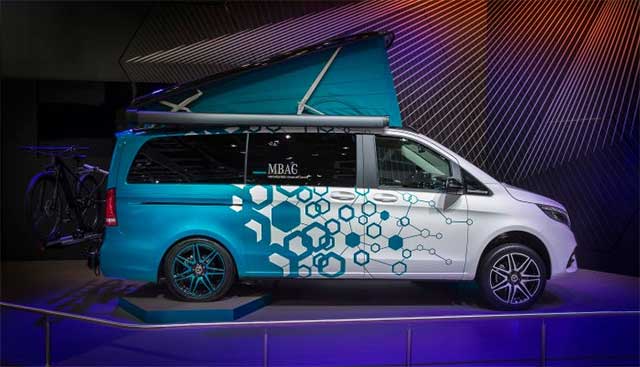 Also when off-road, the fuel cell powertrain makes the most of its strengths. The fuel cell can be used as an independent, powerful energy source for the living area – such as for running the heating, air conditioning or refrigerator. This offers great advantages especially when camping in the great outdoors, as no external power source is required, the fuel cell, unlike a combustion engine, being emission-free and almost silent in operation. 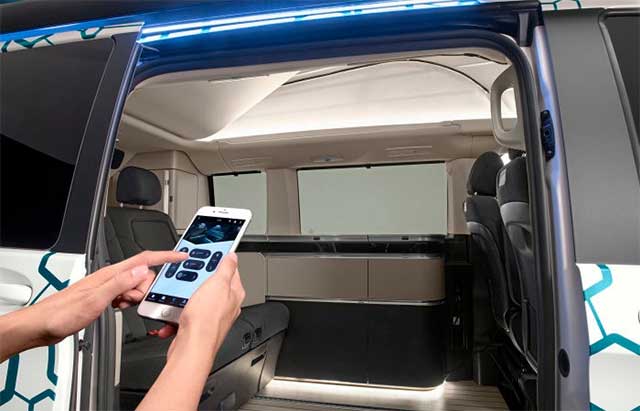 The mega-trending “connected home” or “smart home” opens up a new dimension in (user) comfort/convenience and is therefore also playing an increasingly important role with regard to camper vans. To address this need, Mercedes-Benz Vans has developed the “Mercedes-Benz Advanced Control” (MBAC). This is an interface module that removes the separation between the basic vehicle and the living area. It connects the components in front of and behind the B-pillar, allowing them to be operated easily and conveniently from a central location. Thanks to MBAC, camper vans based on Mercedes-Benz Vans will in future become a connected home on wheels.

With the “Sprinter Connected Home”, which is close to production, Mercedes-Benz Vans will give a preview of connected solutions at Caravan Salon Düsseldorf that, thanks to MBAC, bodybuilders will be able to implement based on the new Sprinter as early as 2019. The possibilities extend from the central display of the gas level to the control of lights and heating by touch displays in the vehicle or from a smartphone app, to give just a few examples. The “Concept Marco Polo”, which will also be on view at the Mercedes-Benz stand, takes up these possibilities while taking even one step further towards the future. Its highlights include voice control as well as automatic window darkening by means of liquid crystals embedded in the glass. This makes for a modern feel-good ambience.

As early as 2019: connected home based on the new Sprinter

The “Sprinter Connected Home”, which is close to production, demonstrates some of the possibilities of centralised camper van control, which, thanks to MBAC, bodybuilders will be able to implement in 2019 based on the new Sprinter. This includes centralised operation of the following components via the MBUX touch display in the vehicle cockpit, via a separate display in the living area, which can in future be freely positioned by the bodybuilder, or from a smartphone app:

The “Concept Marco Polo” takes up these functions and also presents additional forward-looking comfort/convenience features that can be controlled from a central location, thereby saving time – including: centralised control of the air suspension – for levelling the vehicle on uneven ground – as well as the electric seat bench/bench berth in the rear and the electric pop-up roof. A special highlight is the darkening of the windows. Liquid crystals in the side windows allow the glass to be darkened if desired. There is no need for curtains or blinds. In addition, the “Concept Marco Polo” comes with an inductive smartphone charging station – so no more “cable clutter”. The charging station is easily accessible on the cooler.

The “Concept Marco Polo” not only allows the components in front of and behind the B-pillar to be operated from a display in the cockpit or from a smartphone app; voice control is another option. This is activated by saying “Hey Mercedes”. Two examples of how it can be used:

– Having arrived at the camp site, it’s time to chill out… When the voice command “Hey Mercedes, I want to relax” is given, the “Concept Marco Polo” regulates the vehicle level, extends the pop-up roof and awning, activates the ambience lighting in awning, gaiter and under the kitchen unit and switches on the music. The electric power comes in an environmentally friendly way from the solar module on the concept vehicle, which produces 400 watts of power. Everything is set for a relaxed start to the holidays.

– It’s departure day, things need to happen fast… At the command “Hey Mercedes, get ready to leave”, the level control is deactivated, the awning and pop-up roof retract. In addition, the seat bench/bench berth is returned to the upright position and the ambience lighting is switched off. In next to no time, the camper is ready for a stress-free journey home.