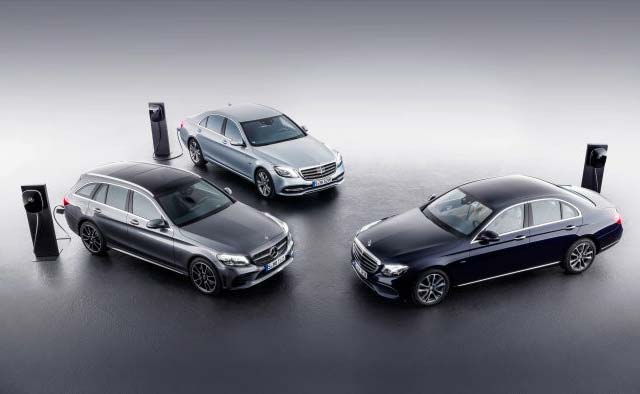 The Geneva Motor Show will see the debut of two new Mercedes-Benz preproduction models that combine state-of-the-art plug-in hybrid powertrain technology. Like the S 560 e, the C- and E-Class plug-in diesel hybrids will in future use third-generation hybrid technology.

Delivery of the first models is scheduled for late summer 2018. At the moment, the company is making systematic preparations for series production of the new plug-in hybrids, with its engineers taking the last important steps on the way to the start of production. Also new: an intelligent, connected variant of the Mercedes‑Benz wallbox will make for easier charging while offering a series of additional functions via a new app.

Plug-in hybrids represent a key technology on the road to a locally emission-free future for the motor vehicle. They offer customers the benefits of two worlds: in town, they run in all-electric mode, while on long journeys they profit from the range of the combustion engine. Mercedes-Benz will for the first time combine the state-of-the-art four-cylinder diesel with the third-generation hybrid drive. The result: even higher efficiency, remarkable ride comfort and dynamic performance as well as an impressive range.

As the strengths of plug-in hybrids come to the fore, especially in larger vehicles and on mixed route profiles, Mercedes-Benz is now opting for this powertrain concept from the C-Class upwards. A key advantage in the strategic hybrid initiative is offered by Mercedes-Benz’s intelligent, modular hybrid concept: designed to be scalable, it can be transferred to a large number of rear-wheel drive model series and body styles as well as left- and right-hand drive variants. Hybridisation makes the combustion engine more efficient while delivering a more dynamic performance and greater driving pleasure.

Soon to launch: plug-in diesel hybrid in C- and E-Class

One of the highlights with regard to technology and efficiency promises to be the new plug-in hybrid diesel in the Mercedes-Benz C- and E-Class. Mercedes‑Benz will for the first time pair its state-of-the-art diesel engine with an externally chargeable hybrid system. The combination of the new OM 654 four-cylinder diesel engine with the latest-generation 9G-TRONIC 9-speed hybrid transmission promises to enhance the experience of locally emission-free mobility while at the same time offering emotively appealing driving pleasure. The projected key points are 90 kW electric output, an additional electric torque of 440 Nm and an electric range of around 50 km in the NEDC.

This is made possible in the third hybrid generation also by the new lithium-ion battery, which can store 13.5 kWh of energy. The new on-board charger doubles the charging rate from 3.6 kW to 7.2 kW. A discharged battery can thus be fully recharged in two hours at a wallbox, for example in the convenience of one’s own home. This is possible within around seven hours even at a conventional domestic power socket.

The third-generation hybrid technology supports the driver with further improved, intelligent drive management. Through the extended use of data from the navigation system and information from the camera and the radar sensor, third-generation hybrid vehicles can look ahead, well beyond the driver’s field of vision, and adjust to the specific speed/route profile. Events such as negotiating towns on the way to the destination are taken into account when planning the available electrical energy, and during recuperation and thermal conditioning of the drive components.

The new plug-in diesel hybrids in the C- and E-Class will share the new OM 654 four-cylinder diesel engine. This ultra-modern engine family opens up new dimensions in efficiency. It is the first passenger car diesel engine to use the stepped-bowl combustion process – named after the shape of the combustion bowl in the piston. The innovations also include the combination of an aluminium engine block and steel pistons, as well as the further-improved NANOSLIDE coating of the cylinder walls. The internal friction has been reduced by around 25 percent. The new engine also benefits from the use of fourth-generation common-rail injection with pressures of up to 2050 bar.

On top of this, the engine is also more compact than its predecessor. All components relevant for efficient emissions reduction are installed directly on the engine. Thanks to the near-engine configuration, exhaust aftertreatment has a low heat loss and excellent operating conditions.

The third-generation hybrid transmission is based on the 9G-TRONIC automatic transmission. The torque converter, clutch and electric motor are housed in the innovative hybrid drive unit. The compact design was achieved by integrating and connecting the separating clutch, torsional vibration damper and torque converter lockup clutch within the rotor of the electric motor. The torque converter with its powerful and highly efficient hydraulic circuit offers the customary smoothness when pulling away in hybrid mode.

Developed together with Bosch as part of the EM-motive joint venture, the electric motor was specially designed for the 9G-TRONIC plug-in hybrid transmission. The equally new power electronics have allowed further increases in output and torque compared with the second generation. The electric performance of 90 kW and 440 Nm contributes to an effortlessly superior driving feel. The top speed in e-mode has been raised from 130 km/h to 140 km/h.

A key factor in the increase of the electric range to around 50 kilometres is the nominal capacity of the new lithium-ion battery, which has grown to 13.5 kWh, while the size of the battery has remained the same. The evolution of the cell chemistry from lithium-iron-phosphate (LiFePo) to lithium-nickel-manganese-cobalt (Li-NMC) made it possible for the cell capacity to be increased from 22 to 37 Ah. The highly efficient battery system comes from the Daimler subsidiary Deutsche ACCUMOTIVE. The power electronics are housed in the engine compartment.

The new-generation Mercedes-Benz wallbox makes the charging of plug-in hybrids and electric vehicles even more convenient for the customer: with up to 22 kW, the home charging station is more powerful than ever and makes it possible for the first time, among other things, to control various functions from a smartphone. These include charging control, user management and consumption overview.

The new-generation home charging station from Mercedes-Benz also comes in an even more elegant housing design with cable management. It will be available for European customers from summer 2018 – more than 40 other markets will later follow. Customers can choose between three versions: the basic Wallbox Home, the internet-capable Wallbox Advanced and the Wallbox Twin for charging two vehicles at the same time.

The attractiveness of electric vehicles is closely linked to the availability of suitable charging options. Whether at home using a wallbox, while shopping, at work or super-fast on the motorway: the options for supplying electric vehicles with energy are highly varied: the majority of charging will take place at home. With a wallbox, this is not just convenient, but also considerably faster than from a domestic wall socket, because the wallbox allows charging with up to 22 kW. The new third-generation plug-in hybrids from Mercedes-Benz, for example, can take a charging rate of 7.2 kW. This means that such a vehicle can be charged up to four times faster with a wallbox than when charging from a domestic wall socket.

The intelligent Advanced and Twin wallboxes are internet-capable, with a built-in electricity meter and allow access control by RFID (Radio Frequency Identification). This makes it possible to manage several vehicles of different users, which is especially attractive for fleets – as well as for office communities or apartment buildings. Thanks to intelligent sharing of the charging power by local load management with up to 14 additional wallboxes, there is no need – even if several wallboxes are installed – for expensive upgrading of the existing house connection. The special thing about the Wallbox Twin: it allows two vehicles (each with 11 kW) to be charged simultaneously from the same wallbox. The Home and Advanced wallboxes will be available from summer 2018, with the Twin variant coming out slightly later in the year.