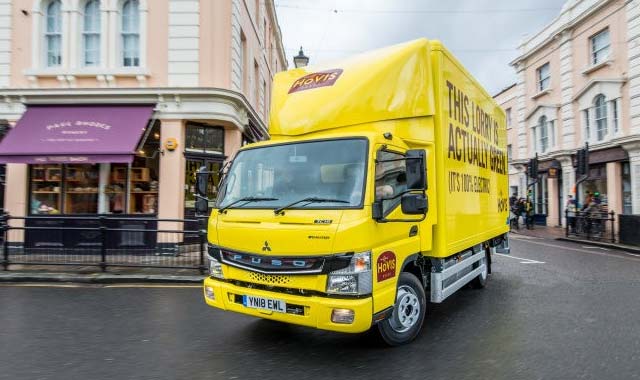 Daimler Trucks has handed over the first all-electric FUSO eCanter trucks to customers in Great Britain.

The world’s biggest manufacturer of commercial vehicles is thus bringing its electric light-duty truck (7.5 tonnes) to a further major market following the market launches in New York, Tokyo and Berlin.

More than 90,000 kilometres already driven in everyday tests ensure that the customers in the UK and other markets can also drive a reliable and economical vehicle. With the world’s first series-produced all-electric light-duty truck Daimler Trucks is reacting to the continuously growing demand for emission-free and low-noise urban distribution haulage.

DPD is an international courier service which delivers 4.8 million parcels a day in over 200 countries. In Great Britain DPD employs over 6000 employees and drives 2340 vehicles. DPD will use two FUSO eCanter for an initial period of two years.

Wincanton PLC is Great Britain’s largest logistics service provider and employs around 17,500 employees at more than 200 sites. The company plans to use five FUSO eCanter trucks in its fleet.

Hovis is a company specialising in baked goods and has its headquarters in High Wycombe. It employs around 3200 people in Great Britain. Hovis is starting out with two FUSO eCanter trucks.

Customers in the UK are benefiting from a wealth of experience

The FUSO eCanter was developed by the Daimler subsidiary Mitsubishi Fuso Truck & Bus Corp. (MFTBC). Production for the European and USA market is in Tramagal (Portugal). The FUSO eCanter models for customers in Asia come from the MFTBC plant in Kawasaki. Following its global market launch in September 2017 in New York the first eCanter went to companies such as UPS in the USA, Yamato and 7-Eleven in Japan as well as DHL, DB Schenker, Rhenus and Dachser in Germany.

The eCanter has a gross vehicle weight of 7.49 tonnes and depending on the body and area of application a load capacity of up to 4.5 tonnes. The vehicle’s electric drive system comprises six high-voltage lithium-ion batteries with 420 V and 13.8 kWh respectively. With a permanent-magnet motor it delivers 129 kW (180 hp) of power to the rear axle via a single-speed transmission. One battery charge facilitates a range of around 100 kilometres. This range exceeds the distance usually covered per day in light-duty distribution haulage.