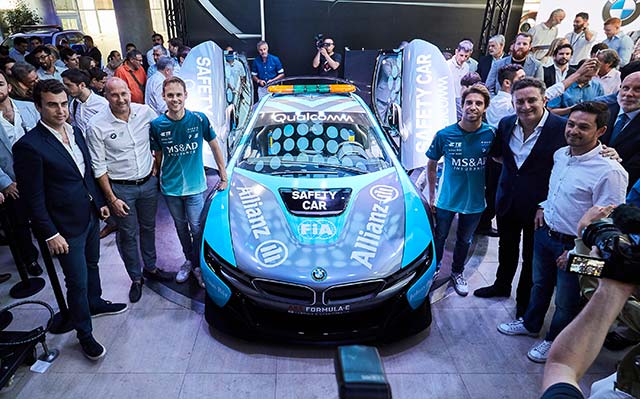 The new Qualcomm Safety Car BMW i8 Coupé celebrated its debut on Thursday in the Chilean capital Santiago.

The car will feature from the fourth race in the ABB FIA Formula E Championship, which will take place on Saturday. BMW i has been “Official Vehicle Partner” since the first Formula E season and is now on track with the next generation of the Qualcomm Safety Car BMW i8 Coupé, boasting a range of technical advances.

The new flagship of the BMW i car fleet for the ABB FIA Formula E Championship makes use of the “Qualcomm Halo Prototype Technology” inductive charging system. The system uses no cable connections and charges this special BMW i8 Coupé (combined fuel consumption: 1.9 l/100 km; combined energy consumption: 14.0 kWh/100 km; combined CO2 emissions: 42 g/km) up to 80 per cent in just one hour, with a performance of 7.2 kilowatts. To do so, the Safety Car drives over a special bottom plate, which immediately initialises the wireless charging procedure. This saves time and effort, which can be vitally important during races on a Formula E weekend.

It is not just the inductive charging system that makes the Qualcomm Safety Car BMW i8 Coupé different to the production car. Other areas include a roll bar, rear wing and rear hatch made of carbon fibre, a front splitter, sports seats from the BMW M4 GTS, 4-point belt, a roof-mounted signal light system, BMW M carbon ceramic brakes and a sports chassis.

Alongside the BMW i8 Coupé, the new BMW i3s as “Medical Car” and “Race Director Car”, and the BMW X5 xDrive40e as “Rescue Car” are part of the BMW i car fleet in the ABB FIA Formula E Championship.

“I am delighted to be here in Santiago to attend the reveal of the latest BMW i8, the Qualcomm Safety Car for the electric street racing series,“ said Agag. “On Saturday, we will celebrate the first edition of the Antofagasta Minerals Santiago E-Prix. When we first started Formula E, many people said that this series would not have a future. BMW was amongst the first who opened its doors and believed in our championship. Ever since the very first race in 2014, the Qualcomm Safety Car has sat proudly at the front of the grid.”

Correira said: “Thank you to BMW i for bringing such a great livery on my new Safety Car. The new seats and the roll bar make the new car a little bit lighter than the old one. The performance and the size of the battery have been increased. All in all driving the car is great fun.”