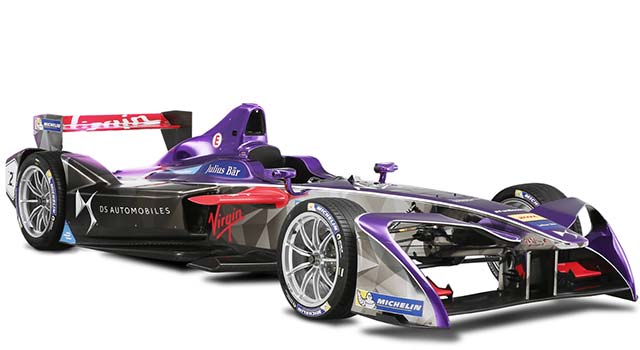 In anticipation of the launch of Formula E’s third season, beginning 9 October in Hong Kong, DS Virgin Racing has released a thrilling video to unveil its Season 3 livery.

Shot over 10 hours in thunderstorm conditions in the abandoned streets and walkways of Manchester’s Media City, the video opens with a panning shot through a lightning storm and across a pitch dark harbour. Out of the darkness emerges a hint of the DS Virgin Racing car, complete with new Season 3 livery.

López is a nine-time world champion across seven different racing categories, known in the racing community and his Argentinian homeland as “Pechito”, or ‘The Cold One’ for his aggressive driving style. The pair walk through the darkened streets before the footage cuts to the cars, alternately screaming through abandoned streets in the rain and speeding around corners, reflections of the updated livery sliding off glass buildings and wet roads.

The big reveal comes after 60 seconds, where a driver performing 360 degree water-spraying doughnuts dramatically unveils the DS Virgin Racing season 3 livery, complete with a unique new pattern effect stretching across the chrome and a brighter, more vibrant version of purple, which has become the signature colour of the team in Formula E.  The new front wing, in a stacked double decker design is also a stunning addition to the racing car and looks amazing in the colours of the DS Virgin Racing team.

Throughout the video, shiftingslow and rapidmotion cuts between stuttered audio and bassy electronica. Weaved between all of this is the unmistakable, turbine-like whineof the Formula E enginesas the cars tear throughthe silent streets: hinting at the pop-up, street takeover nature of Formula E race tracks.

The anticipation is now building with less than three weeks to go until the beginning of season three of motorsport’s newest creation: Formula E in Hong Kong.