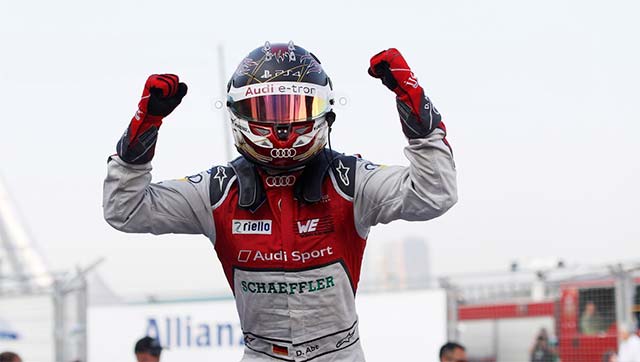 After a steady start under the Qualcomm Safety Car, Round Two of the HKT Hong Kong E-Prix ended in drama as Venturi Formula E driver Edoardo Mortara handed victory to Audi Sport Abt Schaeffler’s Daniel Abt on his 25 Birthday.

For Audi Sport Abt Shaeffler driver Daniel Abt, celebrating his birthday with his first ever win in the FIA Formula E Championship seemed too good to be true.

But sadly, for the 25-year-old German driver, that was precisely the case.

Having clinched victory from Venturi Formula E’s Edoardo Mortara in the final moments of the race, Abt proceeded to celebrate his victory on the podium saying, “this kind of stuff never happens to me…but it happened today!”

But as the crowds dispersed and the celebrations came to a close, Audi Sport came under investigation from the FIA – motorsport’s governing body – who disqualified Abt from Round Two after finding that his car’s components didn’t match up.

With the decision currently under appeal by Audi Sport, the provisional standings mean a bittersweet victory for Mahindra’s Felix Rosenqvist who started on pole. Following up in second place is Venturi Formula E’s Edoardo Mortara, who led the race for 23 laps before blowing his chances of victory with moments to spare.

Feeling overconfident, Mortara blasted into Turn 2 in a bid to clinch the Visa Fastest Lap only to lock up the back wheels and spin, allowing Daniel Abt and Rosenqvist to pass. “It’s difficult to find the words after a race like that,” said an emotional Mortara. “I wanted too much and I made a stupid mistake… I should have just gone for the win,” he said in a candid post-race interview.

But it wasn’t all bad, especially not for Panasonic Jaguar Racing’s Mitch Evans who – following Abt’s disqualification – crept onto the podium, bringing Jaguar Racing it’s first silverware since September 2002. “I’m proud to secure Panasonic Jaguar Racing’s first podium in Formula E. It’s bittersweet as Daniel is a good guy and a mate of mine. After a tough year in our first season, this is a great reward for the hard work of everyone in the team. Tonight we will celebrate this achievement together and then work hard to repeat it.” Applause all round – better dust off that trophy cabinet, Jaguar.

Having been so close to his second championship title last season, a disheartened Sebastien Buemi (Renault e.dams) simply said, “there’s nothing more to say, it’s been a very bad weekend for us.” Having claimed all three team championship titles since Formula E’s inaugural season in 2014, it would appear the French manufacturer team has lost its edge. “I don’t have confidence in the car or the team – in the end, we were not quick enough and that’s the biggest problem. We need to understand why we were not quick, what triggered the [mechanical] problem and what we need to do before Marrakesh,” said Buemi.

After more than enough heartbreak and a smattering of bittersweet success for Formula E’s teams and drivers, the sun has finally set on the HKT Hong Kong E-Prix. In just over a month, the series will return to North Africa for the 2018 Marrakesh E-Prix.

Provisional Race Results – 2017 HKT Hong Kong E-Prix (Rd 2)
The result remains provisional subject to an appeal to the FIA International Court of Appeal by Audi Sport ABT Schaeffler, against the stewards’ decision to disqualify Abt from the event.