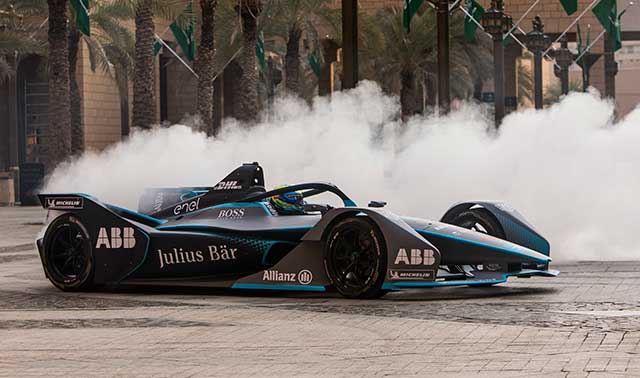 The ABB FIA Formula E Championship has announced a new long-term partnership with Saudi Arabian Airlines (SAUDIA) – the national flag carrier of the Kingdom of Saudi Arabia – as official airline partner of the all-electric series and race title partner of the inaugural SAUDIA Ad Diriyah E-Prix.

Coinciding with the introduction of a new visa process for fan travel to Saudi Arabia – SAUDIA has come on board ahead of season five and the debut of Formula E in the Middle East on December 15. The announcement was made during a special event hosted at the Governorate of Diriyah, following a roadshow through the Saudi Arabian capital with the striking new-look Gen2 car.

Felipe Massa – VENTURI Formula E Team driver – got behind the wheel of the official championship car for the first time, adorned with new SAUDIA branding on the rear-wing and nose cone.

In preparation for the highly-anticipated new era of electric racing and the opening round in Ad Diriyah, the Kingdom of Saudi Arabia is to open to the world like never before as it launches a dedicated online visa process for international tourists.

Fans will be able to apply via the newly-created ‘Sharek’ platform, using an authorised ticket to permit entry to Saudi Arabia. The system will be implemented for the first time as the country gears up for the spectacle of Formula E – marking the introduction of easy application and verification for foreign travellers.

Alejandro Agag, Founder & CEO of Formula E, said: “It’s fantastic news that SAUDIA is joining the ABB FIA Formula E Championship as official airline partner – ahead of the first race in Saudi Arabia and the debut of fully-electric racing in the Middle East. The partnership continues to show the appeal of Formula E on a global scale and I’m proud to welcome SAUDIA to the Formula E family as the excitement continues to build for the opening round of season five on December 15. When you consider Saudi Arabia is opening-up to international sports fans for the first time – and we have a new partner who can connect those fans to our series – it really is a strong addition to the championship.”

Saudi Arabian Airlines Director General, His Excellency Eng. Saleh bin Nasser Al-Jasser, commented: “SAUDIA is pleased to be supporting the ABB FIA Formula E Championship for the upcoming event in Ad Diriyah – a first for the Kingdom of Saudi Arabia and the Middle East. The airline welcomes fans from across the globe and we wish the teams all the very best for the race at the SAUDIA Ad Diriyah E-Prix.”

On top of hosting fully-electric racing for the first time in the region and staging the event in the stunning UNESCO heritage site – the General Sports Authority and Saudi Arabian Motor Federation have confirmed ambitious plans for the arrival of Formula E in the Kingdom of Saudi Arabia.

His Royal Highness Prince Abdulaziz bin Turki AlFaisal Al Saud, Vice-Chair of the Saudi Arabia General Sports Authority, added: “We really want to celebrate this moment with the people of Saudi Arabia – all those passionate fans and families who want to experience a live E-Prix for the first time. But with the introduction of a new visa process, now we can celebrate it with the world. It’s an opportunity we plan to grasp with both hands with the addition of a soon to be announced spectacular line-up of live music, culture and entertainment – featuring global stars as part of an unmissable three-day festival.”

The 2018/19 season of the ABB FIA Formula E Championship sparks into life in Ad Diriyah on December 15.