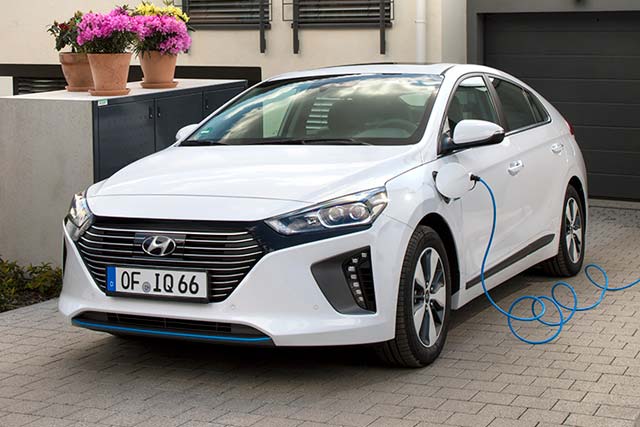 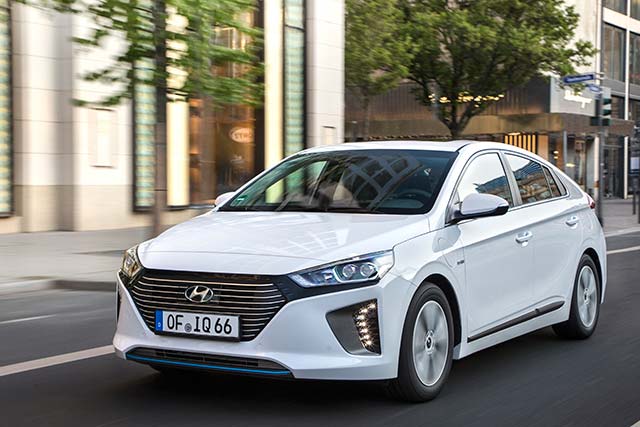 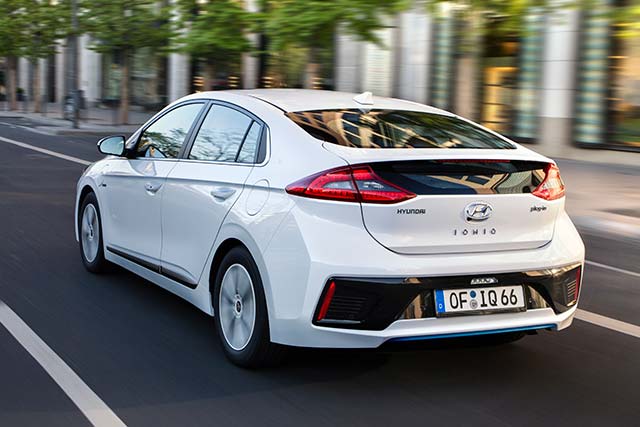 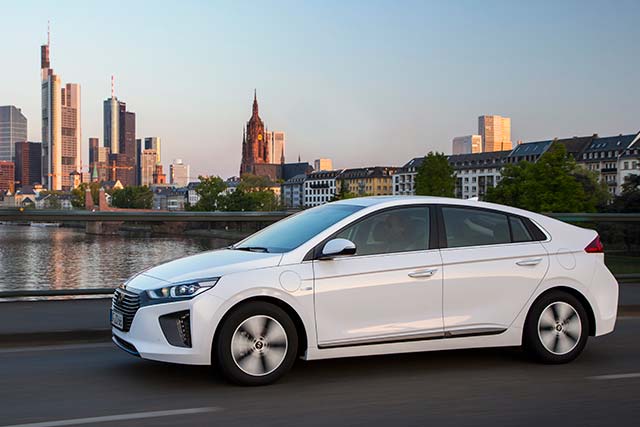 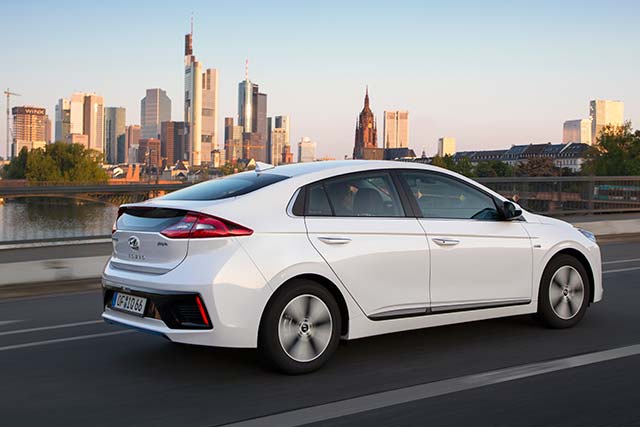 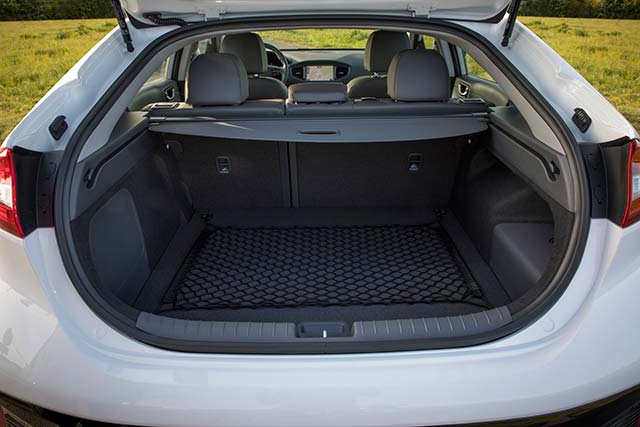 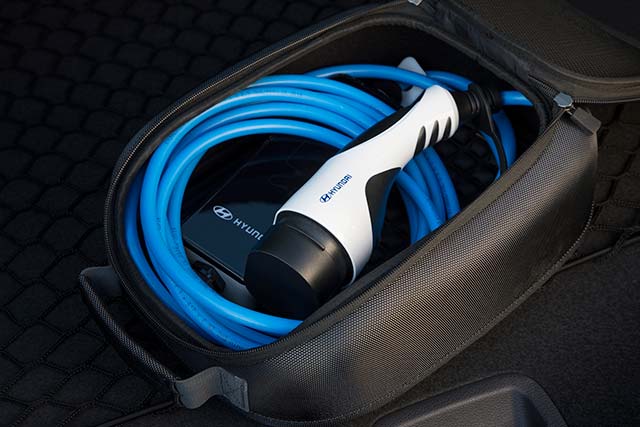 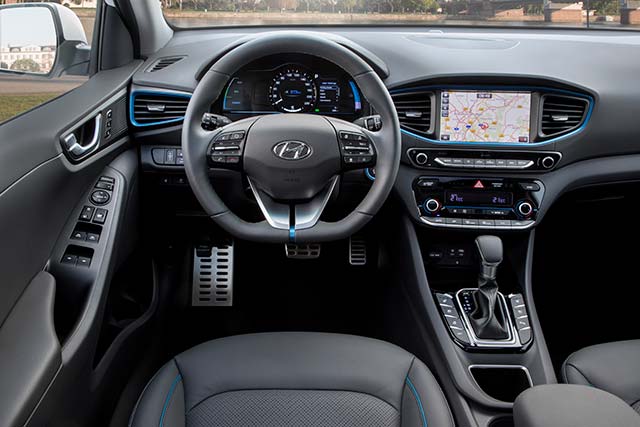 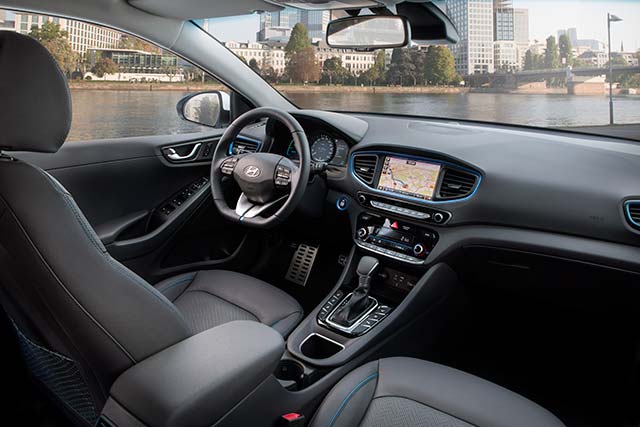 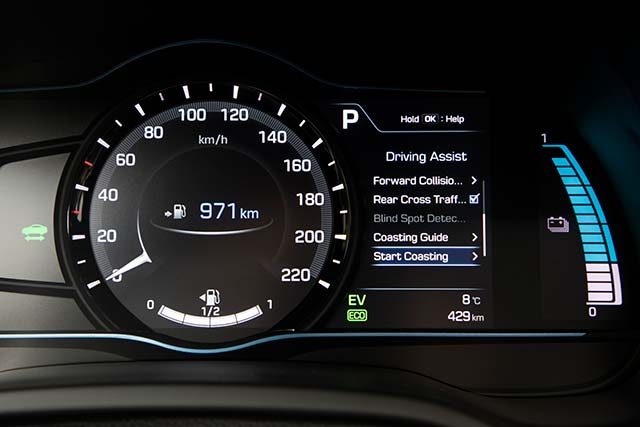 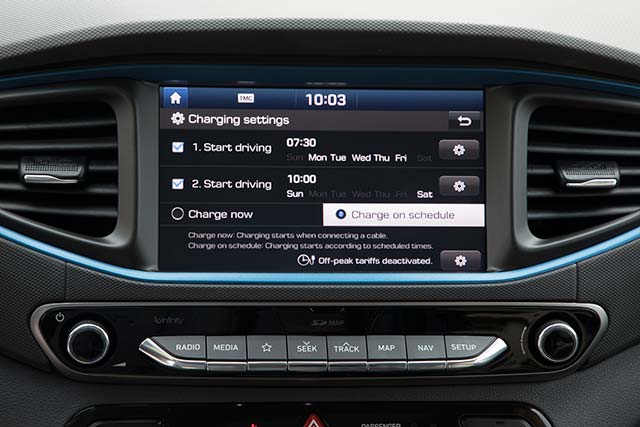 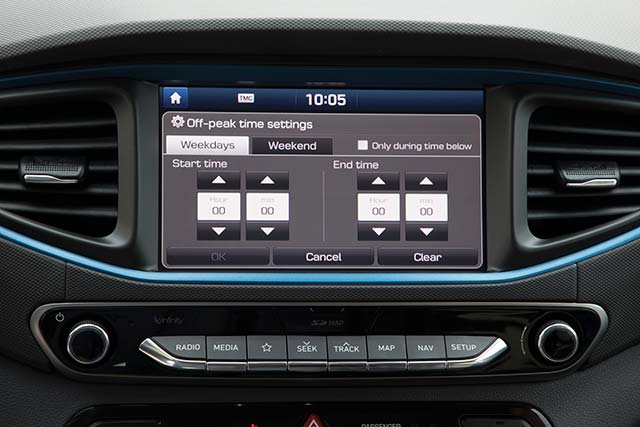 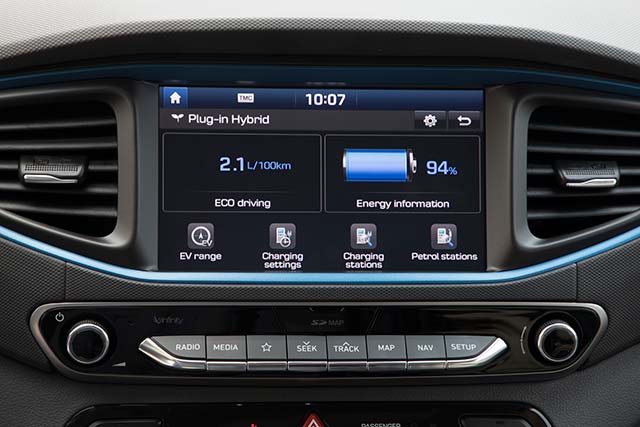 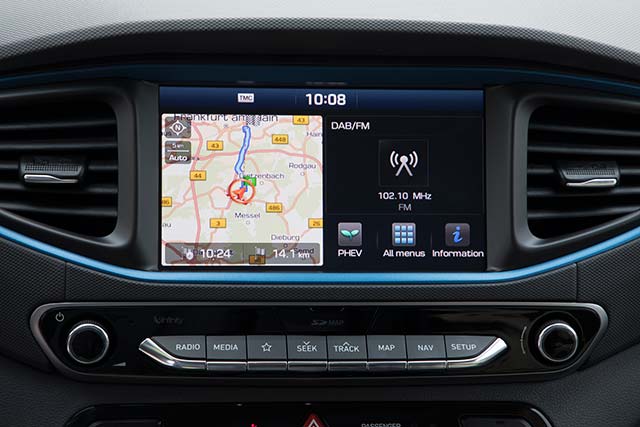 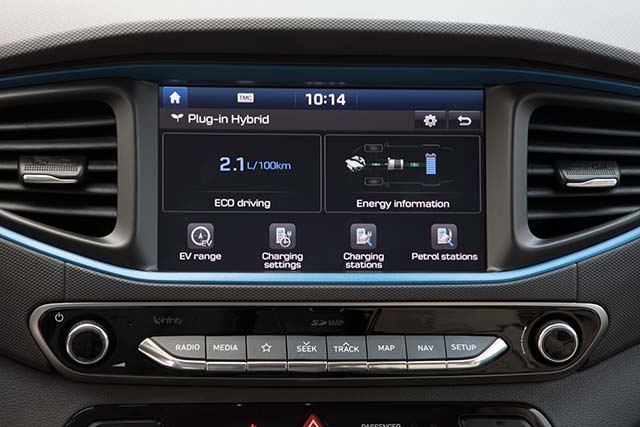 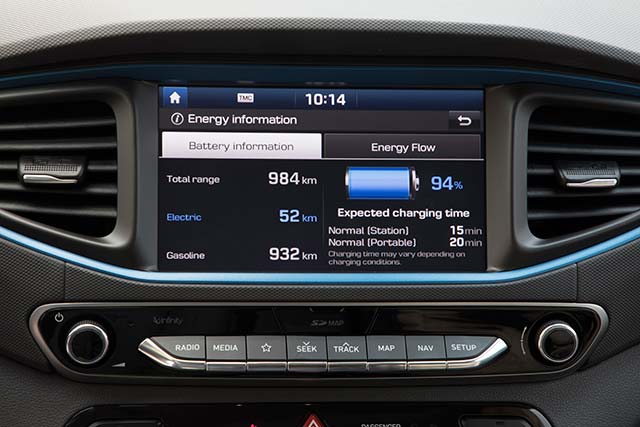 The Plug-in Hybrid is the latest model to be launched following the successful introduction of the Hybrid and Electric in the second half of 2016. The IONIQ line-up is part of Hyundai Motor’s global sustainability strategy to launch 14 eco cars by the year 2020, including five hybrid vehicles, four plug-in hybrid vehicles, four electric vehicles and one fuel-cell electric vehicle.

The IONIQ Plug-in Hybrid combines Hyundai Motor’s new 1.6 GDI direct-injection, four-cylinder petrol engine, with segment-leading thermal efficiency of 40 percent delivering maximum power of 77 kW (105 PS) and 147 Nm of torque, with a 45 kW (61 PS) electric motor that is powered by a 8.9 kWh lithium-ion polymer battery to enable pure electric driving up to 63 km while reducing CO2 emissions to 26 g/km and fuel consumption to 1.1 l/100 km (NEDC combined cycle). The overall system output of both electric motor and petrol engine is 104 kW (141 PS), accelerating the Plug-in Hybrid in 10.6 seconds to 100 km/h; the top speed is 178 km/h.

The interplay between electric motor and petrol engine depends on the state of charge (SOC) of the battery. As long as there is enough charge, the IONIQ Plug-in Hybrid operates in pure Electric Mode, except in driving situations that exceed the motor’s capacity. In Hybrid Mode, careful management of the petrol engine and electric motor ensures utmost fuel efficiency. Switching into Sport Mode, the IONIQ maximises the usage of both engine and motor to enhance responsiveness in combination with a sportier steering feel; excess output is used to charge the battery.

For charging the IONIQ Plug-in Hybrid at a charging station, the car is equipped with a 3.3 kW on-board charger that converts external alternating current (AC) to direct current (DC) for the high-power battery system. An integrated In-Cable Control Box (ICCB) also allows drivers to charge their IONIQ at a regular household socket.

ECO Driving Assistant System for efficient mobility
The superior fuel consumption and low CO2 emissions of the Plug-in Hybrid are supported by the ECO Driving Assistant System (ECO-DAS). ECO-DAS includes a Coasting Guide that analyses route information from the navigation system to notify the driver when a driving situation demanding deceleration is imminent. This may be a change of direction or exit from a thoroughfare. If such an event is anticipated by the navigation system, a symbol in the instrument panel of the IONIQ and an audio signal inform the driver that he can take the foot of the throttle. The aim is to further reduce fuel consumption by using the electric motor to coast and by minimising brake usage. The Coasting Guide operates at speeds between 40 and 160 km/h while the IONIQ is in ECO mode.

Another feature of ECO-DAS is Predictive Energy Management, which regulates the interplay between the electric motor and the petrol engine. The IONIQ Plug-in Hybrid increases the petrol engine’s operation to charge the batteries when an ascending section on the route is anticipated based on the altitude data from the navigation system. This minimises inefficient engine operation, because the battery has enough power to assist in these situations. When a descending section is anticipated and the batteries are well charged, the car increases the electric motor’s usage before driving downhill. Then the electric power is recovered through regenerative braking.

Electrifying driving experience and smart connectivity
The IONIQ Plug-in Hybrid enhances the electric driving experience through dedicated features of the eight-inch high resolution touchscreen. At a glance, drivers are offered information on the energy flow of the hybrid system, the fuel economy and the electric range. The electric motor and petrol engine usage as well as nearby fuel and charging stations are also displayed. An ECO Level measures the overall driving efficiency. Charge Reservation is another feature tailored for electric driving: Charging of the Plug-in Hybrid’s battery can be programmed according to the driver’s departure time. Thanks to the Off-Peak Time Charging option, owners can set charging times to benefit from the lower cost of electric power depending on their local power tariffs for example during night time.

The IONIQ further enhances the driving experience through its seven-inch digital information cluster. With a high resolution of 1,280 x 720 pixels, the TFT screen displays information such as speed, drive range and navigation information, plus battery status and drive modes. Depending on the selected mode, the layout of the instrument cluster changes. In Sport Mode, the display changes into a revolving digital speedometer surrounded by an analogue-style tachometer, indicating the engine’s rpm against a red background.

The light and rigid body features 53% Advanced High-Strength Steel for better ride and handling characteristics, while enhancing passive safety through high-impact energy absorption and minimised distortion in the event of a collision. The 8.9 kWh lithium-ion polymer battery of the IONIQ Plug-in Hybrid was engineered on the basis of a fourfold safety concept.

Appealing design with class-leading aerodynamics
The Plug-in Hybrid’s exterior features LED headlamps and specially designed 16-inch wheels, while sharing most general details with the Hybrid, such as the front grille, the vertical C-shaped LED daytime running lights and an elegant blue or silver character line below the front and rear bumpers. The sleek aerodynamic shape helps achieve a class-leading drag coefficient of just 0.24 Cd and creates an appealing silhouette, while offering enough space for up to five passengers inside the IONIQ.

The exterior is available in eight colours, two of them with a metallic and five with a pearl finish: Polar White (solid), Platinum Silver, Marina Blue (both metallic), Phantom Black, Iron Grey, Aurora Silver, Phoenix Orange and Demitasse Brown (all pearl). Depending on the trim, there are two interior colour choices: Lava Stone (black) or Afternoon Breeze (beige) with white accents or black with blue accents. Seat options include knitted or woven fabric or leather seats. The wheels have a white or clean silver colour with blue or white accents. The grille of the Plug-in Hybrid is either Dark Metal (blue moulding) or Black Hi-glossy (blue or silver moulding).

200,000-kilometre warranty on the battery
In addition to the industry-leading Five Years Unlimited Mileage Warranty, Hyundai Motor includes an enhanced package for customers who opt for the IONIQ, adding an eight-year, 200,000-kilometre warranty on the high-voltage battery. Together with a comprehensive list of standard features and a competitive price, the IONIQ Plug-in Hybrid provides unique value among alternative-powertrain cars.

IONIQ Electric and IONIQ Hybrid
The IONIQ Electric offers pure e-mobility thanks to a 28 kWh lithium-ion polymer battery for a range of over 280 km (NEDC). The instantly available torque of 295 Nm is delivered by the electric motor with an output of 88 kW (120 PS) through the single-speed reducer transmission, accelerating the car up to 165 km/h.

The IONIQ Hybrid’s electric motor delivers 32 kW (44 PS) with a maximum torque of 170 Nm, powered by a lithium-ion-polymer battery with 1.56 kWh capacity, positioned under the rear seats. In combination with the 1.6-GDI engine, the IONIQ Hybrid offers a system output of 104 kW (141 PS) rpm and up to 265 Nm of torque, accelerating to a top speed of up to 185 km/h with CO2 emissions as low as 79 g/km (combined).