Renault and Qualcomm demonstrate wireless charging at speed of 100km/h 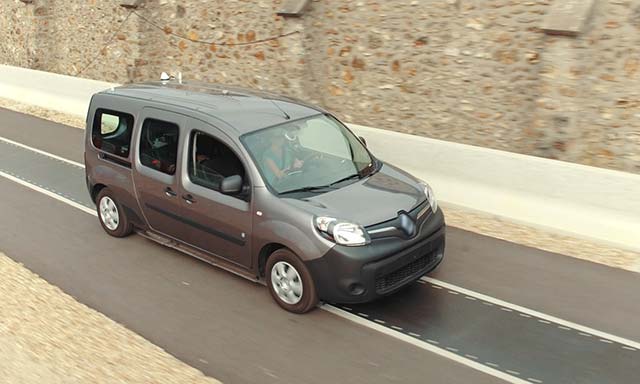 Renault has partnered with Qualcomm Technologies and Vedecom in designing a DEVC system capable of charging an electric vehicle dynamically with a charge of up to 20 kilowatts at speeds up to, and in excess of, 100 kilometers per hour. The DEVC system has been designed to support real-world implementation of dynamic charging. The two Renault Kangoo Z.E. vehicles can pick up charge in both directions along the track.

The dynamic charging demonstrations took place at the 100-meter test track, built by Vedecom at Satory, Versailles, near Paris, within the FABRIC project. Qualcomm Technologies and Vedecom installed the primary part of the DEVC system in the test track, whilst Vedecom and Renault installed the secondary part onto two Renault Kangoos Z.E.. The DEVC system will shortly be handed over to Vedecom to perform tests for FABRIC. The tests will evaluate the operation and efficiency of energy transfer to the vehicles for a wide range of practical scenarios including vehicle identification and authorization on entering track, power level agreement between track and vehicle, speed and alignment of vehicle along track.

FABRIC is a €9 million project, partly-funded by the European Union, addressing the technological feasibility, economic viability, and socio-environmental sustainability of wireless DEVC. The project began in January 2014 and will continue through December 2017, and is being undertaken by a consortium of 25 partners from nine European countries, including automotive manufacturers, suppliers, service providers and research organizations from automotive, road and energy infrastructure domains. The main aim of FABRIC is to conduct feasibility analysis of wireless DEVC as a means of EV range extension.

“Contributing to this exciting project has enabled us to test and further research dynamic charging on our Kangoo Z.E. vehicles,” said Eric Feunteun, Electric Vehicle Program Director, Groupe Renault. “Our research engineers have worked very closely with the Qualcomm Technologies and Vedecom teams to complete the DEVC system integration demonstration as part of FABRIC. We see dynamic charging as a great vision to further enhance the ease of use of EVs, and the accessibility of EVs for all.”

“We are inventors. We are wireless electric vehicle charging. This dynamic charging demonstration is the embodiment of this,” said Steve Pazol, vice president and general manager, Wireless Charging, Qualcomm Incorporated. “I am immensely proud of what we have achieved. The combination of a global team of expert engineers and Qualcomm Halo technology, which covers all aspects of WEVC systems, irrespective of the magnetics used, has enabled us to really push the boundaries of the possible and outline our vision for future urban mobility.”