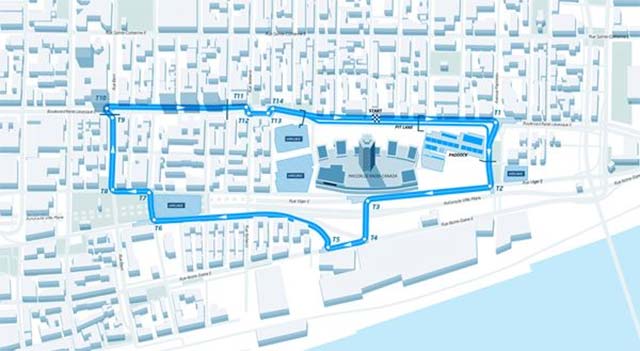 The FIA Formula E Championship has revealed the location and track layout for the season finale double-header in Montreal.

The third season of the electric street racing series will come to a close with two races on the streets of Montreal along the banks of St. Lawrence River on July 29 & 30.

The 2.75km (1.71mile) circuit, which remains subject to FIA track homologation, consists of 14 turns and winds its way along Rue Viger E and past Maison Radio-Canada – with the 20 fully-electric Formula E cars launching from the start-line on Boulevard Rene-Levesque E.

Formula E is putting its trust in Evenko, a Montreal based promoter specialising in the production of major events in the province of Quebec. Pollstar, the entertainment industry’s most respected source, ranked Evenko as the top independent promoter in Canada and the eighth most important promoter in North America.

Addressing a gathering of assorted media and distinguished guests at Complexe Desjardins in Montreal – including the Mayor of Montreal and season one Formula E champion Nelson Piquet Jr – Alejandro Agag, CEO of Formula E, said: “Formula E wants to bring fully-electric racing to the streets of the world’s leading cities and Montreal is another fantastic new addition to the calendar. Montreal is a great city with a great vibe – the perfect place to conclude the third season of Formula E. I’m sure the drivers will revel in the opportunity to fight for the title against the backdrop of Montreal.”

Jean Todt, President of the FIA, said: “Montreal has a great motorsport tradition and the local authorities, as well as its citizens are particularly receptive to a hot topic such as a new model for sustainable mobility. If there’s one single event that brings together these two elements, it’s definitely a Formula E race. I’m therefore very pleased that Montreal is preparing to host the final round of the third season of the FIA Formula E Championship. I would like to thank Denis Coderre, who is not only the mayor of the city, but also a member of the FIA High Level Panel for Road Safety, as well as being a personal friend of mine, for having given permission for this event to go ahead. I’m sure this event will attract the attention of motorsport fans, but also a wider audience, who are interested in the future of mobility in this great city.”

Denis Coderre, Mayor of Montreal, said: “I’m very pleased that Montreal is now among the host cities for Formula E. In Montreal, we wish to promote transportation electrification. This race, which speaks to this wish, will be conducted on an urban circuit and will be a festive family event where everyone will be able to admire the prowess of electric vehicles. It will give us, in 2017, at the climax of the celebrations for the 375th anniversary of Montreal, the opportunity to demonstrate that high performance can go hand-in-hand with sustainable development.”

Sylvain Vincent, President of Montreal, It’s Electric! said:”The mission of Montreal, It’s Electric! goes beyond Formula E. Our organisation was created to generate enthusiasm for the noble and necessary goal of transportation electrification. The City of Montreal is firmly committed to achieving this goal, and the arrival of Formula E will be a showcase for these efforts. This racing series demonstrates the perfect equation between sustainable development and performance, and we are very proud that our city will host the championship finale in 2017.”

Nelson Piquet Jr, the winner of the inaugural FIA Formula E Championship and current NEXTEV NIO driver, said: “Canada is a country that embraces motorsport, and I’m so happy to be here in Montreal to help unveil the track layout. It’s a fantastic city and it’s going to be amazing racing around the streets here in July. It’s the perfect venue for our season finale.”

Oct 23, 2016Blagojce Krivevski
Toyota to sell fuel cell buses from early 2017Survey Finds That 43% of Californians Considering Buying or Leasing an EV by 2025