Vergne victorious in frantic battle on the streets of Bern 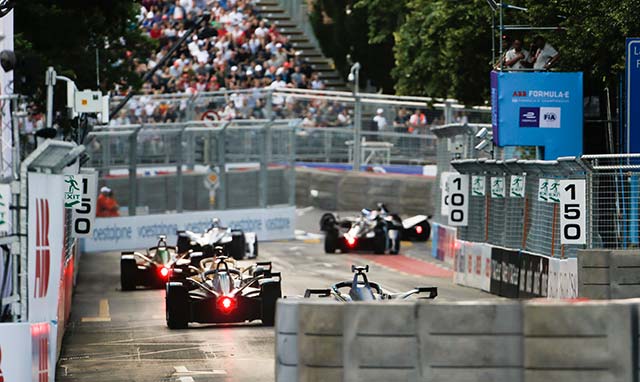 Jean-Eric Vergne held off the advances of Mitch Evans and weathered a late rain shower to win in Bern and extend his lead at the top of the ABB FIA Formula E Championship standings to 32-points over Lucas di Grassi.

The DS TECHEETAH driver led from lights-to-flag, picking-up three points for Julius Baer pole position in the process and pulling away from his nearest rivals in the championship chase – building a buffer before heading to the season finale in New York.

However, it wasn’t a walk in the park for Vergne, who was hurried and hassled by Evans all the way to the chequered flag. The Panasonic Jaguar Racing pilot put pressure on Vergne, looming large in his mirrors, but was unable to pass with the Frenchman making his car as wide as possible.

Despite trying to take the initiative and activating ATTACK MODE earlier than expected, Vergne mirrored every move Evans made and hung on to victory with an assured and astute drive. Not even a light sprinkling of rain in the latter stages could dampen Vergne’s mood.

Sebastien Buemi brought his Nissan e.dams car home in third to round-out the podium places and receive the adulation of the adoring Swiss fans. Buemi beat Andre Lotterer at the line, but Lotterer later dropped down the order after being handed a post-race time penalty for ignoring the pit exit light.

With Lotterer’s penalty applied, Sam Bird was promoted to fourth – making the most of his good fortune after suffering a puncture in the skirmishes at the start, that eventually led to the race coming to a stop.

The race was temporarily suspended following a coming together at the first corner, with Pascal Wehrlein and Maximilian Gunther blocking the path for the rest of the pack – allowing Bird to return to the pits and change tyre.

Although he got caught-up in the first-corner collision, Gunther gathered his composure and carried his car to a career-best fifth position. Daniel Abt was a place further back in sixth, ahead of Alex Lynn in seventh and Felipe Massa in eighth.

Lucas di Grassi leapt up the field to ninth after a lacklustre qualifying left him in a lowly grid slot. The final points-paying position was filled by Stoffel Vandoorne, who also vaulted up the order from 15th to 10th.

With the title up for grabs and eight drivers still mathematically in contention, the ABB FIA Formula E Championship crosses the pond for the season finale showdown – set against the backdrop of the stunning New York City skyline on July 13 & 14. Can anyone catch Vergne?