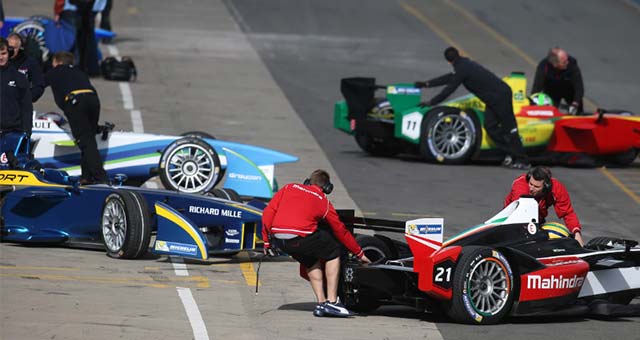 It’s been seven long weeks since the second season of the FIA Formula E Championship was decided in dramatic fashion at the Visa London ePrix.

Although there’s been no public running since then, in private the teams and manufacturers have been developing their season three powertrains. But these tests have taken part in isolation, with the teams purposely steering clear of one another.

Now, this is all about to change, as later this morning for the first time all 10 season three teams will be on track at the same time. The first public appearance of the Jaguar Racing and Techeetah teams, the first tests for Jose-Maria Lopez, Felix Rosenqvist and Maro Engel. The first chance to see how the revised front end looks in the flesh.

But what actually happens in pre-season testing? To explain what is being assessed when the cars hit the track – and what goes on during those times when they are behind closed doors in the garage – Formula E spoke to Mark Preston, technical director of Techeetah.

What is the point in testing?
“The basis of it is that you have to test your theories. You can come up with all sorts of theories about how to make the car go faster. Nowadays we do work on the simulator and make changes to the way we save energy or the balance of the car with the aero set-up, but the models are not 100 per cent accurate. If they were, it would be easy, but they are not. So the answer is that you have to correlate your theories with reality and get all those theories worked out before you go racing. And with Formula E more than most other racing series, we can’t take too many big risks because you have two sessions and then you’re straight into qualifying, and if you screw up qualifying that’s almost the end of the day. In contrast F1 is quite relaxed. You arrive on Friday and test for an hour and a half, then you have a couple of hours to make some changes before the next test, then the next day you test again before you qualify and you still have time to make some changes before the race. Whereas in Formula E it’s just boom, boom, boom, boom. So because of that it makes it even more useful to do testing. One of the hardest things is that Donington is a nice track with a lovely smooth surface, whereas we race on street tracks with really bumpy surfaces. So we have to think about how the models which have worked in Donington will perform at the bumpiest track on calendar.”

How is a three-day test broken down?
“It depends if the weather is nice for all three days, because if it isn’t you might do some things in the rain that aren’t to do with grip such as software. If it’s dry the whole three days and not windy – which is another variable that might change things – you build up from trying to get the car with a good balance. This will be one of the first times we’ve tried the cars with the new tyres. To get a balance on the car – and that means get the car feeling like it’s not massively understeering or hard to drive – you want to find a point where there driver feels ‘OK from this baseline we can try this and come back’. And then you start going through the programme. If one of the parameters you were trying on the engine required maximum downforce then you would try a lot of aero stuff, find out where you want to be sitting in aero world and then try the other things that are reliant on the aero. You map out all the things you want to try and then logically match them. The problem is always that things can change day to day. Also, if you have a new driver they may have never driven the car. Ma Qing Hua hasn’t had any pre-season testing. He went from the simulator straight into the race. So the test for him will be a chance to go back to the start and now he can get the car set up how he wants. Go back to the balance and the braking and start again. But the difficult job for the driver is relating the problems they had in Paris to what they are experiencing in Donington.”

What are the unique demands of Formula E testing?
“Operationally it’s kinda weird because in a petrol engine car, so long as it doesn’t break down you just come in fill up and off you go again almost immediately. But in Formula E, the battery lasts 25 minutes, but takes an hour to charge. So with two cars, it doesn’t add up. We have a spreadsheet on which you put exactly what you are going to do, with everything assigned a time – one minute for changing tyres, for example – and that runs out for the day to show that it’s possible. You can set up so that hopefully you come in and make some changes as the other car is charging, but operationally it’s completely different to other motorsport. The day we can charge these in 10 minutes, which I’m sure we’ll get to at some point, the whole thing will change operationally.”

Is there a formula for extrapolating the data from Donington to the other circuits?
“You hope that if you truly understand something, and you have a model and you correlate it, and you understand that the radius of this corner results in x, then the radius of that corner will translate to any track. So you hope that by correlating as many of the variables as possible that when you move to the other place hopefully the new variables – such as bumps – don’t disrupt the model too much.”