How The Formula E Title Can Be Won 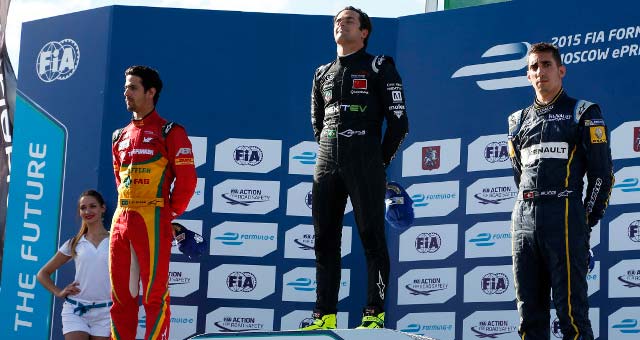 The Visa London ePrix brings the first season of Formula E to a close. Uniquely, the race in Battersea Park is a double-header, which means there are still a maximum of 60 points still to race for.

Because of this, six drivers retain a mathematical chance of winning the title.

For Bird to win the championship he needs to take two pole positions, win both races and secure two fastest laps. On top of this, he needs Piquet to fail to score, di Grassi to score fewer than 17 points and Buemi to record a score of under 23. It’s incredible unlikely.

For D’Ambrosio, two wins won’t be enough unless one of them is accompanied by a pole or fastest lap and again Piquet fails to score and di Grassi and Buemi have underwhelming weekends.

Prost is in a slightly better position in that back-to-back wins would give him a four-point lead over Piquet – the equivalent of two ninth places or an eighth.

So, in short, Prost, D’Ambrosio and Bird require little short of a miracle and all three of them will almost certainly be eliminated from the title fight come 5pm on Saturday evening (Bird may well have gone by the end of qualifying at 12.55pm).

That leaves Buemi and di Grassi to take the fight to Piquet. To ensure that the championship goes to the final round on Sunday, Buemi has to beat Piquet on the road. But even that might not be enough if the Brazilian takes pole and bags fastest lap.

Di Grassi can (only just) afford to be beaten by Piquet on Saturday and still keep his title hopes alive, but he too really needs to take pole and win the race to get himself really into the thick of the fight.

For Piquet things are far simpler. A point on Saturday reduces his rivals to four. So pole position or a top-10 finish is enough to see of Bird.

Pole position and a top-nine finish kills off D’Ambrosio’s hopes. Even if the Belgian takes his first pole of the season and wins with fastest lap, a top-five finish from Piquet is enough to take his rivals down to three.

If Piquet takes pole, a fourth-place finish is enough to eliminate Prost’s hope as the Frenchman is the only driver who may have a dropped score (his 10th place in Berlin is his lowest haul). Should Prost record a maximum score, Piquet will need to finish on the podium to knock him out of contention.

If Piquet takes pole, he’ll only need to finish ahead of Buemi to remove the Swiss from contention, unless the e.dams-Renault racer takes fastest lap, which, depending on whether they are outside of the top three, could be enough to keep his hopes alive for another day.

If Buemi takes pole, then Piquet will need to outscore him by 12 points to win the title. This is the difference between first and fourth, second and fifth, third and ninth and fourth and a no-score.

A first pole of the season for Piquet would mean he needs to outscore di Grassi by 10 points. If neither set fastest lap, this is the difference between first and fourth, second and seventh, third and eighth, fourth and ninth and fifth and a no-score.

A di Grassi pole – also his first of the season – would increase Piquet’s required difference to 14. This is the difference between first and fifth, second and ninth and third and a no score. A fastest lap for di Grassi on top of the pole would mean even if Piquet won, any position inside the top eight would keep the title fight simmering on for the Audi Sport ABT driver for another day.

In short, the odds are firmly in Piquet’s favour, but should the Brazilian hit any trouble in the Saturday race, di Grassi and Buemi would be poised to thrust themselves back into the heat of the action.