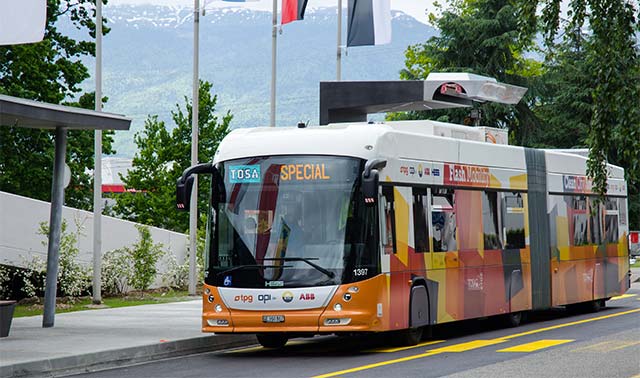 ABB will deliver and deploy 13 flash-charging stations along an urban transit bus route, as well as three terminal and four depot feeding stations. This will be the world’s fastest flash-charging connection technology taking less than 1 second to connect the bus to the charging point.

The onboard batteries can then be charged in 15 seconds with a 600-kilowatt boost of power at the bus stop. A further 4 to 5 minute charge at the terminus at the end of the line enables a full recharge of the batteries. The innovative technology was developed by ABB engineers in Switzerland.

The decision to deploy TOSA on Line 23 was undertaken after the successful pilot of the first such e-bus on the route from Geneva airport to the Palexpo exhibition center. The Line 23 bus route will be slightly modified in order to provide a fast connection to Praille-Acacias-Vernet, a new suburb being built to accommodate 11,000 flats and office space for about 11,000 employees. When fully commissioned in 2018, the high-capacity articulated buses will depart from both terminuses at 10-minute intervals during peak times. The line carries more than 10,000 passengers a day and the replacement of diesel buses by TOSA electric buses reduces noise as well as greenhouse gas emissions.

As part of a separate award by HESS, ABB will supply 12 flexible drivetrain solutions for the buses including integrated traction and auxiliary converters, roof-mounted battery units and energy transfer systems (ETS), as well as permanent magnet traction motors. Both contracts include five-year maintenance and service agreements to ensure operational reliability, efficiency and safety.

Geneva is one of the world’s leading cities, recognized as a global center of diplomacy, a financial hub and a technology and innovation center. It is also a popular tourist destination with a high quality of life. It hosts the highest number of international organizations in the world, including global headquarters of institutions like the United Nations and the Red Cross.

Electric buses can help save as much as 1,000 tons of carbon dioxide per year, when compared with existing diesel buses. 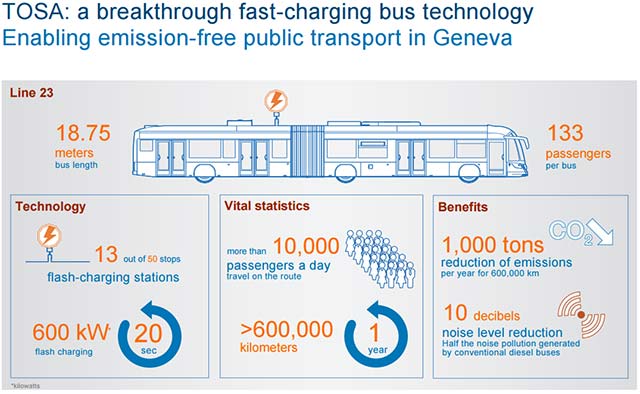