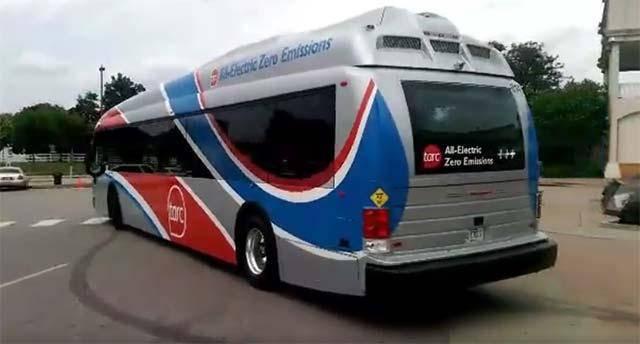 TARC has begun adding six new Proterra electric buses along the Fourth Street corridor between downtown and Iroquois Park, stopping at some of the city’s most popular destinations.

With the new buses, TARC will have a total of 15 all-electric buses on the road, making it one of the largest electric bus operators in the country.

The new buses, which feature a bike rack for up to three bikes, travel everyday exclusively on Route #4-Fourth Street between downtown and Iroquois Park and also on a section of the route to Strawberry Lane on weekends.  They stop at or near Museum Row downtown, the University of Louisville, Speed Museum, Churchill Downs, the Kentucky Derby Museum, Old Louisville, restaurants, hotels, and much more.

The all-electric buses provide cleaner air, fuel conservation and maintenance cost savings. They replace buses that are 16 years old and have traveled more than 600,000 miles.  The harmful emissions from the old buses – more than 30,000 pounds each year into the air – will be eliminated with the electric buses.  About 60,000 gallons of diesel fuel a year will also be spared.

In a related news, Proterra announced that eight new and existing customers have won Federal Transit Administration (FTA) Low or No Emission Vehicle Deployment Grants. The 2016 Low-No grant winners will use their funds, a total of $22.8 million, to purchase 35 Catalyst buses, bringing Proterra’s total number of firm orders to 287 vehicles from 38 cities across the United States. With more than 2.4 million miles of revenue service, Proterra has more battery-electric buses on the road today in North America than any other manufacturer.

For Low-No grant recipients like Santa Clara Valley Transportation Authority (VTA), this represents a new era of mobility as the Silicon Valley’s transit agency expects to roll out five 40’ Catalyst XR buses as a pilot program to support their innovation strategy, which aims to improve the transit customer experience, offer better transportation choices, and optimize VTA vehicles, roadways and other mobility infrastructure. VTA serves nearly two million residents with an average weekday ridership of 104,583, and is incubating a number of technologies to optimize the transit customer experience.

From Delaware to Washington to Louisiana, electric bus adoption is growing amongst a diverse group of transit agencies from coast-to-coast. Other innovative transit agencies that have embraced the economic and environmental benefits of Proterra’s zero-emission electric bus and that also received Low-No grants include: