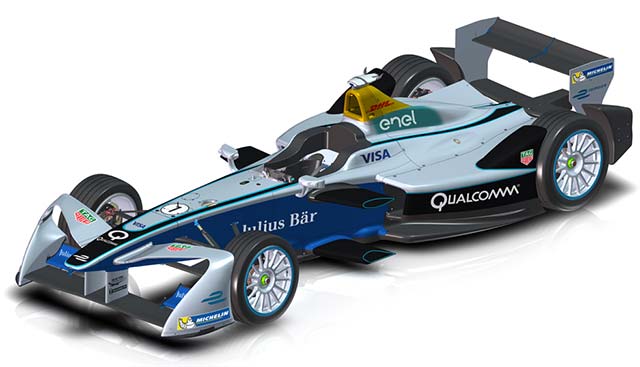 The Formula E car will sport a bold new look for the 2016/17 FIA Formula E Championship, thanks to the introduction of a stunning new front wing.

The new two-tier wing makes the fully-electric single-seater look more aggressive and unlike any other racing car in the world.

The Formula E cars will have a 25 percent increase in power over the next three seasons.

While the amount of power available for the drivers for season three will remain at a maximum of 200kW, for season four this will rise to 220kW before being hiked to 250kW in season five.

Although there is scope within the technical regulations for battery power to be raised to 250kW next season, as outlined in the original technical road map, after careful analysis of the performance of the batteries and the cost of developing this technology, the decision was made to phase in the power increase more gradually.

Two changes that are coming online for season three are raising the permitted amount of regeneration to 150kW from its current level of 100kW, and reducing the weight of the car from the current 888kg to 880kg.

The new-look fully-electric Formula E cars will take to the track for pre-season testing ahead of the 2016/17 FIA Formula E Championship at Donington Park next month.

The 10 teams, with the new addition of Jaguar and Techeetah, have six days of official testing to prepare their challengers for the opening round of the third season of the world’s first fully-electric racing series in Hong Kong on October 9.

All manufacturers are also entitled to an additional 15 days of private testing which expires on July 31. The first official collective test gets underway on August 23, with two days open to members of the public free of charge – August 24 & 25.