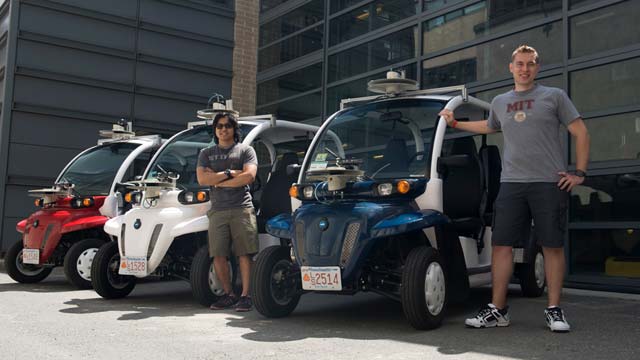 Ford and the Massachusetts Institute of Technology are collaborating on a new research project that measures how pedestrians move in urban areas to improve certain public transportation services, such as ride-hailing and point-to-point shuttles services.

The project will introduce a fleet of on-demand electric vehicle shuttles that operate on both city roads and campus walkways on the university’s Cambridge, Massachusetts, campus. The vehicles use LiDAR sensors and cameras to measure pedestrian flow, which ultimately helps predict demand for the shuttles. This, in turn, helps researchers and drivers route shuttles toward areas with the highest demand to better accommodate riders.

The MIT research is being conducted by the Aeronautics and Astronautics Department’s Aerospace Controls Lab. ACL researches topics related to autonomous systems and control design for aircraft, spacecraft, and ground vehicles. Theoretical and experimental research is pursued in such areas as estimation and navigation, planning and learning under uncertainty, and vehicle autonomy.

Ford and MIT researchers plan to introduce the service to a group of students and faculty beginning in September. This group will use a mobile application to hail one of three electric urban vehicles to their location and request to be dropped off at another destination on campus.

The electric vehicles are small enough to be able to navigate the campus’s sidewalks, while still leaving plenty of room for traditional pedestrian traffic. Each is outfitted with weatherproof enclosures that shield out inclement weather – a feature particularly useful for New England’s punishing winters.

After requesting the shuttles via a smartphone app, MIT students and faculty won’t be waiting long for their ride to arrive.

During the past five months, Ford and MIT have used LiDAR sensors and cameras mounted to the vehicles to document pedestrian flow between different points on campus. LiDAR is the most efficient way to detect and localize objects from the environment surrounding the shuttles. The technology is much more accurate than GPS, emitting short pulses of laser light to precisely pinpoint the vehicles’ location on a map and detect the movement of nearby pedestrians and objects.

Using this data, researchers study the overall pattern of how pedestrian traffic moves across campus, which helps the researchers anticipate where the most demand for the shuttles will be at any given moment. This allows the shuttles to be carefully pre-positioned and routed to serve the MIT population as efficiently as possible.

Researchers also take into account other factors that affect pedestrian movement on MIT’s campus, such as varying weather conditions, class schedules, and the dynamic habits of students and professors across different semesters.

This collaboration further enhances Ford’s Dynamic Shuttle project, which provides point-to-point shuttle rides to employees requesting rides using a mobile application on its Dearborn, Michigan, campus. The collaboration advances the ride-hailing concept to new heights by examining the movement of pedestrians to predict demand and reduce wait times for shuttles.