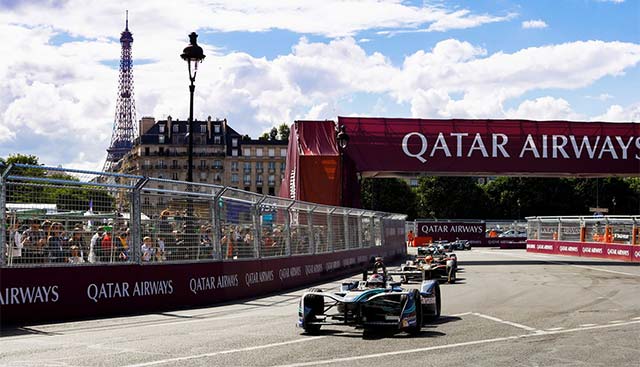 Following its sponsorship of the 2017 Paris E-Prix, Qatar Airways on Monday extended its association with the ABB FIA Formula E Championship to become the race title partner for the 2018 Paris E-Prix, as well as putting its name to the season finale event in New York against the backdrop of Lower Manhattan.

At a press conference in Doha, the airline confirmed it’s set to increase its ties with the electric street racing series for the third edition of the Paris E-Prix on April 28 and the New York City E-Prix double-header on July 14 & 15.

Qatar Airways will also be the official airline partner for the inaugural Rome E-Prix on April 14 around the streets of the Italian capital and the Berlin E-Prix on May 19.

“With its ability to deliver thrilling racing events using the very latest environmentally-friendly technology, Formula E has demonstrated that this incredible sport is continuing to set the pace and win more new fans wherever their races take place,” said Qatar Airways Group Chief Executive, His Excellency Mr. Akbar Al Baker. “As an airline which is always ahead of the curve and driven to innovate, it makes perfect sense for us to extend our partnership for flagship events this season as the official airline partner of the future of motor racing, through Formula E,” he added.

Flying to over 150 destinations worldwide, Qatar Airways has become one of the world’s fastest-growing airlines after it started as a small regional carrier in 1994. “After another enthralling season last year, we’re delighted that Qatar Airways has reaffirmed its commitment to Formula E by extending its partnership and becoming race title partner of not only the Paris E-Prix, but for this season, the New York City E-Prix as well,” said Formula E’s Founder and CEO Alejandro Agag. “Our shared passion to strive for excellence and innovation will once again see the series make history in some of the world’s most recognisable cities – thanks to the support of Qatar Airways to help us in going places together.”