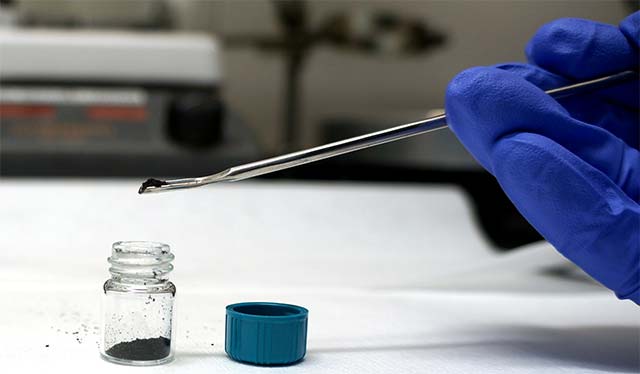 Hydrogen is the lightest and most plentiful element on Earth and in our universe. So it shouldn’t be a big surprise that scientists are pursuing hydrogen as a clean, carbon-free, virtually limitless energy source for cars and for a range of other uses, from portable generators to telecommunications towers—with water as the only byproduct of combustion.

The graphene shields the nanocrystals from oxygen and moisture and contaminants, while tiny, natural holes allow the smaller hydrogen molecules to pass through. This filtering process overcomes common problems degrading the performance of metal hydrides for hydrogen storage.

These graphene-encapsulated magnesium crystals act as “sponges” for hydrogen, offering a very compact and safe way to take in and store hydrogen. The nanocrystals also permit faster fueling, and reduce the overall “tank” size.

“Among metal hydride-based materials for hydrogen storage for fuel-cell vehicle applications, our materials have good performance in terms of capacity, reversibility, kinetics and stability,” said Eun Seon Cho, a postdoctoral researcher at Berkeley Lab and lead author of a study related to the new fuel cell formula, published recently in Nature Communications.

In a hydrogen fuel cell-powered vehicle using these materials, known as a “metal hydride” (hydrogen bound with a metal) fuel cell, hydrogen gas pumped into a vehicle would be chemically absorbed by the magnesium nanocrystaline powder and rendered safe at low pressures. 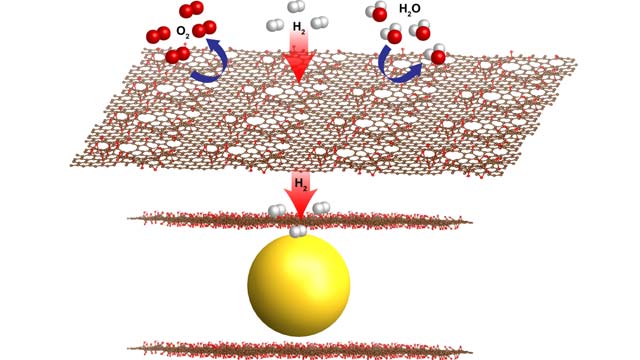 Jeff Urban, a Berkeley Lab staff scientist and co-author, said, “This work suggests the possibility of practical hydrogen storage and use in the future. I believe that these materials represent a generally applicable approach to stabilizing reactive materials while still harnessing their unique activity—concepts that could have wide-ranging applications for batteries, catalysis, and energetic materials.”

A potential advantage for hydrogen-fuel-cell vehicles, in addition to their reduced environmental impact over standard-fuel vehicles, is the high specific energy of hydrogen, which means that hydrogen fuel cells can potentially take up less weight than other battery systems and fuel sources while yielding more electrical energy.

A measure of the energy storage capacity per weight of hydrogen fuel cells, known as the “gravimetric energy density,” is roughly three times that of gasoline. Urban noted that this important property, if effectively used, could extend the total vehicle range of hydrogen-based transportation, and extend the time between refueling for many other applications, too.

More R&D is needed to realize higher-capacity hydrogen storage for long-range vehicle applications that exceed the performance of existing electric-vehicle batteries, and other applications may be better suited for hydrogen fuel cells in the short term, such as stationary power sources, forklifts and airport vehicles, portable power sources like laptop battery chargers, portable lighting, water and sewage pumps and emergency services equipment.

The tiny size of the graphene-encapsulated nanocrystals created at Berkeley Lab, which measure only about 3-4 nanometers, or billionths of a meter across, is a key in the new fuel cell materials’ fast capture and release of hydrogen, as they have more surface area available for reactions than the same material would at larger sizes. Another key is protecting the magnesium from exposure to air, which would render it unusable for the fuel cell.

Working at The Molecular Foundry, researchers found a simple, scalable and cost-effective “one pan” technique to mix up the graphene sheets and magnesium oxide nanocrystals in the same batch. They later studied the coated nanocrystals’ structure using X-rays at Berkeley Lab’s Advanced Light Source. The X-ray studies showed how hydrogen gas pumped into the fuel cell mixture reacted with the magnesium nanocrystals to form a more stable molecule called magnesium hydride while locking out oxygen from reaching the magnesium.