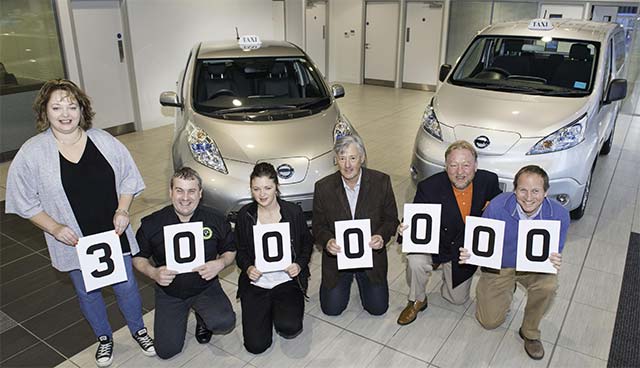 Nissan’s electric vehicles have now clocked up in excess of three million miles as taxis in the UK.

The all-electric Nissan LEAF hatchback and e-NV200 Combi passed the landmark mileage this month after proving their worth on the frontline and becoming a popular choice for taxi and private hire operators across the country.

There are currently more than 140 Nissan EV taxis in operation across Britain, with dozens more on order and many taxi companies and local authorities taking steps to replace diesel and petrol equivalents with cleaner and cheaper EV alternatives.

Had the same distance – equivalent to six journeys to the moon and back or 120 times around the world – been covered in the diesel vehicles the Nissan EVs replaced, it would have cost an estimated £350,000 in fuel. A whopping 899 tonnes of carbon would also have been generated.

However, with average running costs of just two pence per mile, covering three million miles in the LEAFs and e-NV200s would have cost around £60,000 – a massive saving of £290,000.

With zero tailpipe emissions, the models would also have emitted no carbon during operation, helping to improve air quality in the towns and cities where they operate.

Six of the largest and longest-established Nissan taxi fleets the UK – Phoenix Taxis in Blyth, Northumberland, C&C Taxis in Cornwall, Premier Cabs in Blackpool, 203020 Electric in Dundee, eConnect Cars in London and eCorporate Travel in Edinburgh – have surpassed three million miles between them.

With many smaller fleets and independent operators also operating across the country, the true figure is likely to be significantly higher.

During their time in taxi and private hire service, both the LEAF and e-NV200 have proved their durability, reliability and cost efficiency time and time again.

– The first LEAF put into service by C&C Taxis in Cornwall passed 100,000 miles without losing a single bar of battery life and on its first set of brake pads.

– The average Nissan EV taxi is rapid charged (a process taking as little as 30 minutes from zero to 80%) hundreds of times a year with minimal degradation.

– Many Nissan EV taxi drivers are taking home thousands of pounds extra per year as a result of fuel savings. At 203020 Electric, in Dundee, for example, drivers are between £120 and £130 a week better off.