Record No. of Cities for 2015 National Drive Electric Week 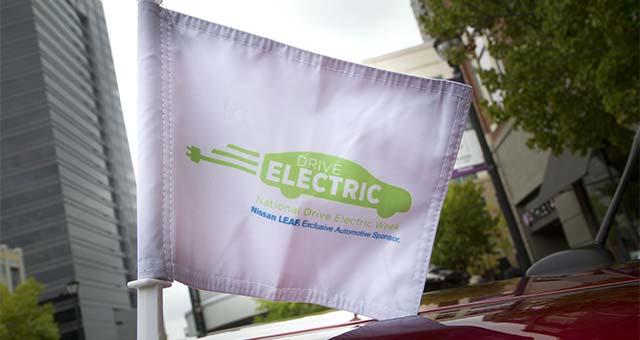 National Drive Electric Week, celebrating its fifth anniversary this year, is based on the idea that nothing beats learning the ropes from existing owners and ride-and-drives in clean, quiet and powerful plug-in vehicles for converting gasoline-car drivers to EV owners. The event showcases the cost-savings, clean-air benefits and fun of plug-ins. Plug In America, the Sierra Club and the Electric Auto Association team up with local groups to organize events, which typically feature all-electric and plug-in hybrid electric cars from every automaker on the market.

Numerous past attendees from around the country have purchased or leased plug-ins as a direct result of Drive Electric Week events, where they learned about the technology from long-time plug-in drivers in a relaxed atmosphere.

“I got to look at and test drive a broad spectrum of electric vehicles without any car dealership pressure,” said Peggy Vadillo Orenstein, a public health analyst at UCLA, where she attended a 2014 event. “I was able to compare different vehicles at the same time. I ended up buying a Ford Fusion Energi 2015. I love the car! I’ve owned BMWs and my last car was an Audi Q5. Nothing beats electric!”

Most Drive Electric Week events are organized by volunteers. They’re held in state capitals and small towns alike. Among this year’s highlights:

– Oklahoma City, OK: Oil-field worker John Gallagher, who hauls oil in his 18-wheeler from a local well site to a major pipeline in the heart of oil country, is staging the first event in Oklahoma.

– Jeffersontown, KY: Brian Kent, driving his Nissan LEAF through 48 states—to plant a tree in each one—will route his gasoline-free, 26,000-mile tour through the event in Jeffersontown, KY.

– San Antonio: Charging a plug-in with solar power, for “zero gallons of fossil fuel use for personal transportation,” will be among panel topics. Also: an electric car parade and “energy lab” for kids (and their moms).

– Woodland Hills, CA: Actor/environmentalist Ed Begley, Jr., who has been driving an EV on sunshine by charging it with solar-generated electricity longer than anyone else, is scheduled to appear at this event, organized for the third consecutive year by teenager Erik Doroski at a high school.

– Hong Kong: Activities will include a “treasure hunt” with points awarded for most public chargers used, test-drives given and the like.

National Drive Electric Week will take place Sept. 12 through 20, 2015. Nissan and its all-electric LEAF have served as the event’s exclusive automotive sponsor since 2013. ClipperCreek and SunPower are also national sponsors and PlugShare is media sponsor.