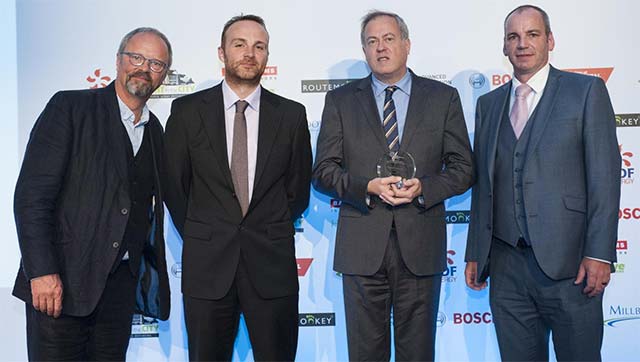 Mitsubishi Motors in the UK has been named the Low Carbon Car Manufacturer of the Year at a prestigious industry award ceremony.

The Low Carbon Vehicle Partnership (LowCVP) announced its Low Carbon Champions for 2014-15 at a packed gala dinner held in association with Cenex in Milton Keynes. The awards celebrate achievement and innovation in low carbon road transport.

The Mitsubishi Outlander PHEV has transformed the plug-in hybrid electric vehicle sector since its launch in 2014. The vehicle leads the market as the UK’s favourite plug-in vehicle and currently accounts for around half of all plug-in car grant applications.

The judges said that Mitsubishi’s Outlander PHEV has been a game-changer, bringing plug-in hybrid technology to a 4×4 SUV, at a competitive price. The model has achieved impressive sales, especially in the company car market, where carbon-based taxation has helped to boost sales of lower carbon vehicles.

The judges said: ‘Mitsubishi has been an early adopter and was ready to take a risk which has paid off in terms of vehicle registrations.’

LowCVP Managing Director Andy Eastlake said: ‘It’s always a pleasure to celebrate success and there were many reasons to commend the contribution of this year’s entries to cutting emissions, both of greenhouse gases and local pollutants.

‘The winning entries are exciting examples of a vibrant and innovative low carbon road transport sector in the UK that is going from strength to strength.’

The judging panel was comprised of 21 senior executives from across the range of organisations with a stake in the low carbon road transport agenda.