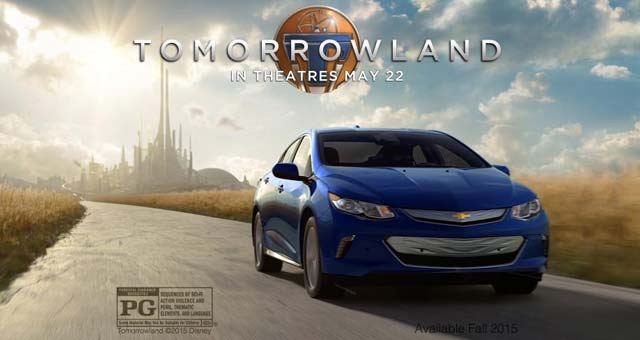 Chevrolet and the upcoming Disney feature, “Tomorrowland,” share a history and future full of possibility, innovation and freedom. “Tomorrow, Today,” celebrates the launch of the 2016 Chevrolet Volt by capturing the spirit of imagination in the process of creating the car of tomorrow.

The spot, which uses a portion of the film’s score, takes place in a design studio at the heart of Tomorrowland as depicted in the film – a space of infinite possibility that embodies the optimism at Chevrolet.

“The Chevrolet archives are full of innovation in the form of sketches, specs and renderings for ‘the car of tomorrow,’” said Paul Edwards, U.S. vice president, Chevrolet Marketing. “This animation reveals how the freedom of imagination helps find new roads in present day as demonstrated in the 2016 Chevrolet Volt – the car of tomorrow, today.”


The spot includes animations based on scans of concepts from the GM Heritage Center in Sterling Heights, Mich. that culminate in bringing the Volt to life.

The five concepts featured are:

– Firebird III, which debuted at the 1959 Motorama. It was an extravagant prototype with a fiberglass exterior, seven short wings and tail fins. This vehicle, like both generations of the Volt, allowed drivers to pre-condition the interior temperature before entering the vehicle.

– Firebird IV was an experimental car created to highlight what could be possible on automatic highways, including the latest infotainment at the time – in-vehicle television. The vehicle was built for the 1964 World’s Fair in New York, which plays a key part in the plot of “Tomorrowland.”

– Aerodynamics, also key to the design of the Volt, heavily influenced the design of the Astro II prototype. The vehicle was revealed at the 1968 New York Auto Show and at the time had speculators wondering if it was the next generation of the Corvette.

– The 1969 Astro III was a sleek, two-passenger experimental car resembling an executive jet aircraft, even down to its low center of gravity tricycle-type wheel arrangement. The Chevrolet Volt’s battery lowers the vehicle’s center of gravity, enhancing stability and handling in inclement weather.

– Chevrolet built the Express concept in 1987 as part of a project consulting with the federal government about building high-speed, limited access commuter roads open to specialized vehicles. The concept is described as “whisper-quiet” much like the Volt when operating in electric mode.

The concepts gradually morph into the battery, the first-generation Volt and finally the next-gen Volt, which drives off from Tomorrowland.

“The spot is a reminder that the Volt realizes a long-held aspiration to make a beautiful, efficient, quiet electric vehicle that is attainable,” Edwards said.

In addition to the broadcast spot, Chevrolet is releasing digital work tied to the film. The next-gen Chevrolet Volt and EN-V concepts will be on the blue carpet at the premiere in The Downtown Disney District in Anaheim, Calif. on May 9.