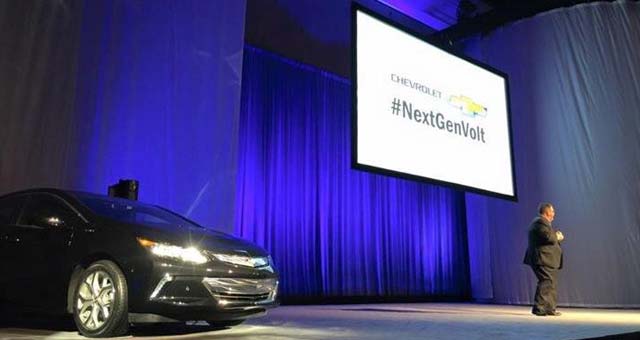 General Motors has revealed the next generation 2016 Chevrolet Volt at a CES press event in Las Vegas.

No details, no other specifics, just our first full look at 2016 Volt, so we’ll have to wait until the Detroit show next week to learn about everything about the vehicle.

The 2016 Chevrolet Volt will use a new, 1.5-liter gasoline engine, it will have more electric range and will offer more user friendly charging, too.

Here is a short video and are some of the images that have surfaced from the brief 30 second reveal:

We’re so excited about #NextGenVolt we brought it out early at #CES2015! Full details on 1/12 at #NAIAS. pic.twitter.com/hPCbTFGSV4

This is your first look at the redesigned 2016 Chevy Volt: http://t.co/IkwUKn7tXU pic.twitter.com/Ebx5sZSVx7