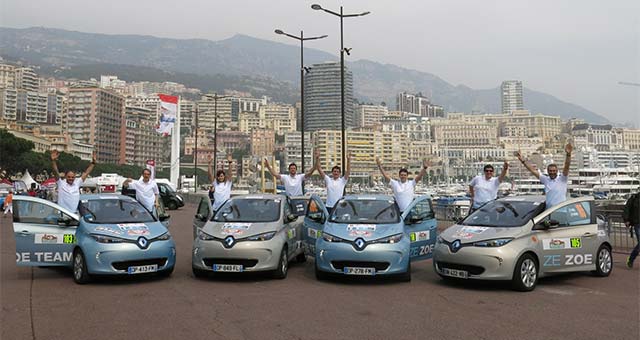 Following its victory last year, Renault ZOE has put in yet another remarkable performance at the 2015 ZENN Monte-Carlo Rally with four ZOE models taking the top four places.

In its second appearance in the prestigious international competition, Renault ZOE led the field:

With eight racing zones punctuated with five regularity tests in this year’s ZENN Monte-Carlo Rally (ZENN standing for “zero emissions, zero noise”), the competitors drove a total of 130 miles over seven and a half hours.  Renault entered four teams, including a press car and a blogger car. A team of individuals also took part in the rally on an individual initiative alongside the competing brands.

At the conclusion of the two-day race, these five ZOE finished in first, second, third, fourth and seventh place. The “individual” team finished fourth. Renault applauds this non-professional team and is delighted to see that the electric hatchback brought it every chance of competing strongly in an event as demanding as the ZENN Rally.

Renault ZOE had already been acclaimed by 98% of its customers for its design, performance, best-in-class range, driving pleasure and exclusive technologies.[wzslider height=”400″ lightbox=”true”]