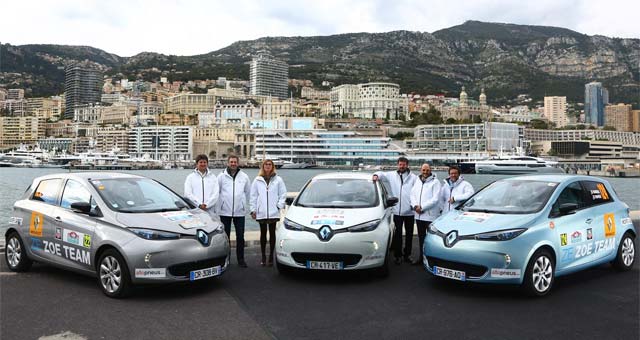 The Rallye Monte-Carlo ZENN (Zero Emission, No Noise) is the “greenest” segment of the Monte-Carlo New Energies Rally; the event is open only to electric vehicles. The fifth rally was held between 21st and 23rd March  in Monaco and featured three special stages ranging from 29 miles and 55 miles in length. These stages were divided into a total of four regularity tests.

The roads visited by the event included the breath-taking, twisty runs from La Turbie to Peille and from Sainte Agnès to La Turbie, high above the Mediterranean coast. Participants had to contend with a combination of torrential rain and fog on the busiest day (Saturday, 22nd March) which featured two special stages divided into three regularity tests.

Almost two years after Renault ZOE established a new 24-hour electric vehicle distance world record (1,011 miles) in June 2012, last weekend saw the all-electric spermini’s first attempt at the Rallye Monte-Carlo ZENN provide further eloquent evidence of its technical and dynamic qualities by securing every one of the five trophies that were up for grabs:

A SHORT HISTORY OF ELECTRIC VEHICLE RALLYING
The Kyoto protocol is an international treaty aimed at reducing greenhouse gas emissions and functions in addition to the United Nations Framework Convention on Climate Change, with member countries convening once a year since 1995.

It was in 1995 that the President of the Automobile Club de Monaco decided to organise the Rallye Automobile Monte-Carlo Electrique. Four events were organised until 1999. However, despite its success, it was not staged in 2000. It was necessary to wait until 2005 for a rally organised exclusively for new-generation vehicles to be held again.

The Rallye Automobile de Monte Carlo des Energies Nouvelles is a round of a bespoke world championship sanctioned by the FIA (Fédération Internationale Automobile). The series features 12 rounds in Europe, Asia, North America and Africa.