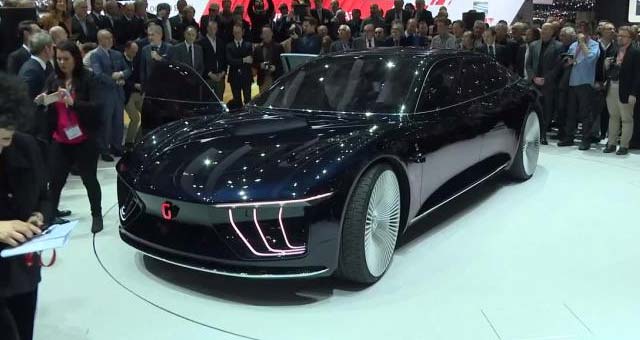 At this year’s Geneva Motor Show, Italdesign Giugiaro presented the GEA concept to show how a luxurious, all-electric autonomous sedan of the future may look like.

Designed by former Audi designer Wolfgang Egger, the GEA EV has a minimalistic exterior shape with few lines punctuated by thing strips of chrome to add a touch of elegance.

Thin LED lights on the front and rear of the car project white light when the car is being piloted by the driver, but when the car is in autonomous mode, the lights turn blue to signal that the car is operating on its own.

The interior is filled with all sorts of goodies, which shows that this model is all about moving people as comfortably as possible.

“In the near future, the real luxury will be time. The time spent traveling will become productive even in a car. With the three internal setting configurations, which can be selected on the control sphere situated between the two front seats, the car can turn into a traveling office, a wellness – developed with Technogym – or a dream area.”

Rear seats area is where the real passenger compartment control center is: a sphere to fit with the LG G-Flex. Indeed, the smartphone has been installed with an app that makes it possible to interact with all the vehicle functions, from the choice of the three different settings to more typical adjustments (seats, climate control, door opening, infotainment control).

Business mode
When business mode is selected, GEA turns into a genuine travelling office. Two transparent LED screens measuring 19” each come down from the roof opposite the rear seats and the passenger can choose the information to project onto them. The dashboard graphics change and create a single setting to match the background of the two screens. The front passenger seat can swivel 180° to face opposite the direction of travel, facilitating dialogue among all passengers; alternatively, the seat back can be folded down fully onto the seat to turn it into a practical counter top.

Wellness mode
The wellness mode, developed in conjunction with Technogym, is ideal during long journeys because it allows the passenger to perform isometric exercises, which are ideal to warm up the muscles. The rear seats feature two aluminum handles which, on pressing a sensor, come out of the tray to be used for exercises on the upper body. For the lower limbs, the floor has been fitted with two boards, also made by Technogym, which can be raised using the controls for use in step exercises. A tutorial video with the Technogym exercise programs appears on the monitors to guide the user.

Dream mode
Dream mode is dedicated to total relaxation. The LEDs project a relaxing blue light, the windows darken and relaxing pictures of galaxies and starry skies appear on the monitors and on the front dashboard. Two comfortable footrests can be extended out from the seats and the right-hand rear seat can extend fully to form a real bed joining up with the front seat, swiveled to face opposite the direction of travel but with the seat back up, to reproduce the typical environment found when flying first class.[wzslider height=”400″ lightbox=”true”]