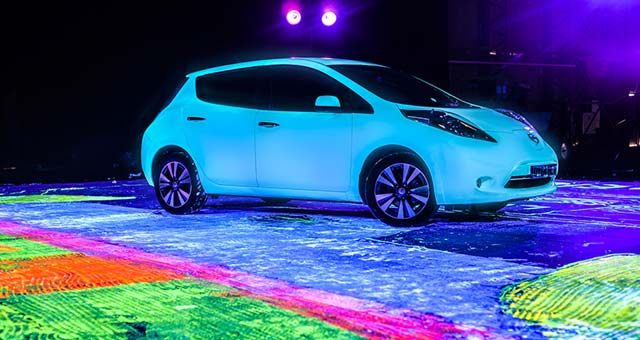 Nissan has broken the GUINNESS WORLD RECORDS title for the Largest Glow-in-the-Dark Painting by using the Glow-in-the-Dark Nissan LEAF to paint a 207.68m2 self-portrait of the 100-percent electric car.

The painting, depicting the front of a Nissan LEAF, was created by maverick motoring artist, Ian Cook of Popbangcolour. Usually seen working with radio-controlled cars, Ian was quick to accept Nissan’s challenge to work on this super-sized project, using the full-size Nissan LEAF to spread strategically placed pools of glow-in-the-dark paint across the canvas with its tyres to create the image.

The painting, which took more than 61 hours to create, has been painted using more than 60 litres of luminous acrylic paint, on a giant PVC coated canvas.

The innovative finish applied to the Nissan LEAF absorbs UV energy and other visible radiation during daylight hours and glows for between eight and ten hours when the sun goes down; making it the ideal tool for the glow-in-the-dark painting.

Cook comments: “This has been one of the most challenging paintings I’ve ever been asked to create – but it looks fantastic!

“The full-sized glow-in-the-dark Nissan LEAF is one of the more extraordinary things that I have used as a painting tool.”