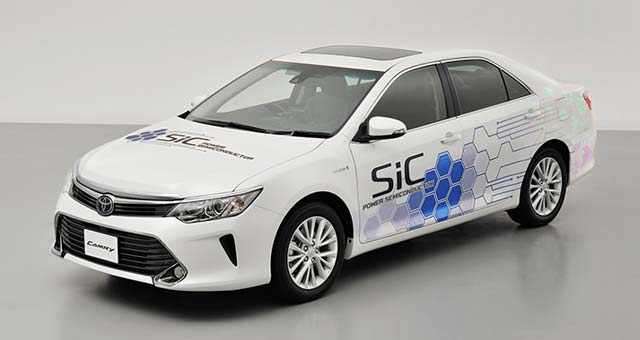 Using a Camry hybrid prototype and a fuel cell bus, Toyota Motor Corporation will bring a brand new technology to the streets of Japan for testing this year.

The tests will evaluate the performance of silicon carbide (SiC) power semiconductors, which could lead to significant efficiency improvements in hybrids and other vehicles with electric powertrains.

Power semiconductors are found in power control units (PCUs), which are used to control motor drive power in hybrids and other vehicles with electric powertrains. PCUs play a crucial role in the use of electricity, supplying battery power to the motors during operation and recharging the battery using energy recovered during deceleration.

In the Camry hybrid prototype, Toyota is installing SiC power semiconductors (transistors and diodes) in the PCU’s internal voltage step-up converter and the inverter that controls the motor. Data gathered will include PCU voltage and current as well as driving speeds, driving patterns, and conditions such as outside temperature. By comparing this information with data from silicon semiconductors currently in use, Toyota will assess the improvement to efficiency achieved by the new SiC power semiconductors. Road testing of the Camry prototype will begin (primarily in Toyota City) in early February 2015, and will continue for about one year.

Similarly, on January 9, 2015, Toyota began collecting operating data from a fuel cell bus currently in regular commercial operation in Toyota City. The bus features SiC diodes in the fuel cell voltage step-up converter, which is used to control the voltage of electricity from the fuel cell stack.

Data from testing will be reflected in development, with the goal of putting the new SiC power semiconductors into practical use as soon as possible.[wzslider height=”400″ lightbox=”true”]