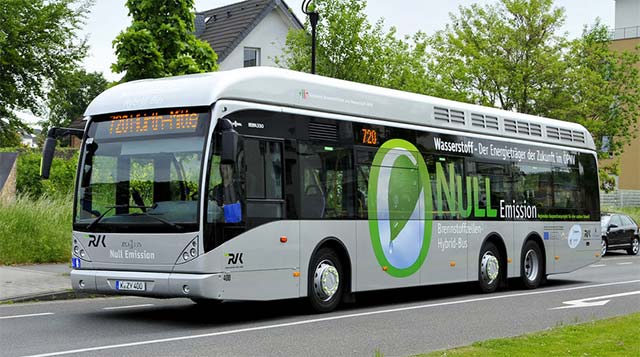 This order consists of 30 fuel cell buses for Cologne and 10 for Wuppertal, making it the largest order for hydrogen-powered vehicles ever been placed in Europe. These high-tech vehicles will be built in the Van Hool factory in Koningshooikt. The first buses will be delivered in the spring of 2019.

Van Hool has been building hydrogen buses for the American market since 2005 and for the European market since 2007. By now, Van Hool has produced 53 hydrogen buses for North America (21) and Europe (32).  The eight hydrogen-powered tram-buses Van Hool is manufacturing for Pau (France) should be added to this total. These are to be delivered in the second half of 2019.

The 40 hydrogen buses for Cologne (30) and Wuppertal (10) are hybrid vehicles (fuel cell and batteries) of the Van Hool A330 type with dual axles and a length of 12 metres. They will be equipped with the latest FCvelocity-HD85 Fuel Cell module from Ballard Power Systems of Vancouver, Canada and fitted with a 210kW Siemens PEM electric traction motor. The bus is designed for 29 seats and 46 (Cologne) and 49 (Wuppertal) standing passengers, with space for two wheelchair users and a pram.

Thanks to the hybrid power source, the buses, with a tank capacity of 38.2kg of hydrogen on board, will be able to carry out a full day’s schedule of 350 km (217 miles).

Together with the lithium batteries and electric motors, the fuel cells form the basis of the all-electric power source. Hydrogen is converted to electricity in the fuel cell, with water vapour as its only emission, while the batteries provide additional power wherever and whenever needed. Thanks to this hybrid power source and the re-use of braking energy, around 8 kg of hydrogen are consumed over a distance of 100 km (62 miles).

The procurement of new vehicles fits into the framework of Germany’s national innovation program for hydrogen and fuel cell technology (NIP), and is financed by the German Federal Ministry of Transport and Digital Infrastructure (BMVI), financed by the “Fuel Cells and Hydrogen Joint Undertaking” (FCH JU), the European public-private partnership is aimed at accelerating the market introduction of fuel cells and hydrogen technology, operating under the EU ‘Horizon 2020’ program.

Van Hool is an independent Belgian bus, coach and industrial vehicles manufacturer. The company, which was founded in 1947, is based in Koningshooikt. The majority of its production is destined for Europe and America. Van Hool has around 4,500 staff worldwide, the majority of whom work at the production facilities in Koningshooikt (Belgium) and Skopje (Macedonia).