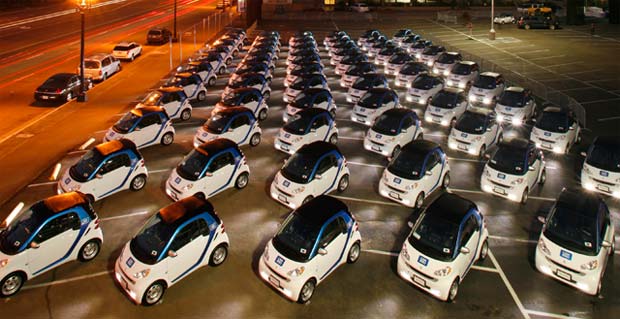 car2go N.A. LLC, the largest carsharing company in the world, announced that over 33,000 car2go San Diego members will have access to an all new electric smart fleet.

The new fleet of four hundred 2014 models, an upgrade from its 2010 model, will provide members a refreshed car2go experience when driving from Point A to Point B.

“San Diego is fast becoming the nation’s electric vehicle capital, and with the largest electric carsharing fleet in the nation, we are proud to continue our commitment in preserving the local environment of our great city,” said car2go San Diego Location Manager, Will Berry.  “The new 2014 vehicles, while maintaining the zero-emissions footprint, have a much smoother acceleration, and overall, a more comfortable car2go driving experience that our members will truly enjoy.”

Since its launch, the car2go Home Area has expanded to 45 square miles within San Diego, providing members the flexibility to get to their destinations at their convenience without having to return the vehicle.  Today, car2go has seen over 1,000,000 car2go trips taken since its initial launch in San Diego in November 2011 as the largest electric carsharing fleet in the nation.

Recently in San Diego, car2go announced an upgraded app feature in its iOS and Android applications that allows members to not only search for and reserve a car2go vehicle, but begin their car2go trip via their smartphones.  Mobile Access has served as an alternative to the company’s member card, which had previously been the only way to access a car2go vehicle and end a ride.