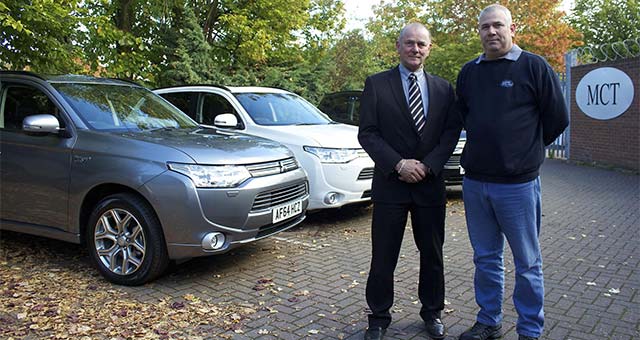 A Northamptonshire engineering company that works with the world of Formula One has gone green with three new Mitsubishi Outlander PHEV SUVs.

The three directors of MCT Engineering, based in Royal Oak Industrial Estate in Daventry, have bought the Mitsubishi Outlander PHEV SUVs as their new company cars.

MCT Engineering, which was established 17 years ago and employs 52 people, produces carbon components for the motorsport industry, including Formula One and World Rally.

It opted for the environmentally-friendly Outlander PHEVs after taking them for a test drive with Corby Mitsubishi in High Street, Old Corby.

Managing Director David Joseph, who runs MCT Engineering along with Steven Szmigeilski and Stephen Holbrooke, said: “We’ve never had company cars before, so this is new for us. As a company we do a lot with F1 and motorsport so the technology on the PHEVs really interested us. There’s a synergy because if you look at Formula One now they are hybrid, they are using 30% less fuel than last year. It’s the way things are going.

“What sold it for us is that they just feel like a normal car. A key factor is the petrol costs – we will save a lot of money on petrol and the tax savings are beneficial.”

Importantly for a business such as MCT, the PHEV also benefits from 100% first year capital allowance, which means its cost can be set against one year’s trading profit, and the vehicle attracts just 5% taxable benefit in kind, saving £8,216 over three years compared with a similar size 4×4 SUV.

Peter Ross, Sales Executive at Corby Mitsubishi, said: “The people at MCT Engineering are used to working in the world of Formula One so they clearly know a lot about cars and it’s great that they are so enthusiastic about the Outlander PHEVs. There’s a real excitement around this vehicle and it has been phenomenal for us since going on sale earlier this year.”

Mitsubishi is currently enjoying a fantastic period of growth. The company’s passenger car sales were up by 164% in August and 36% year-to-date. What’s more, the ground-breaking PHEV is now the UK Government’s Plug-in Car Grant best-seller, accounting for 43% of successful applications.