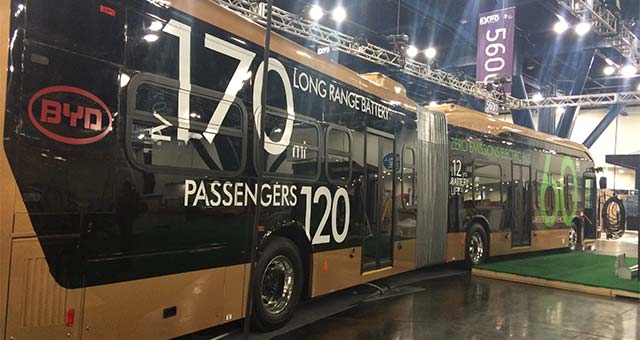 BYD Motors kicked off the 2014 American Public Transportation Association (APTA) Expo in Houston this week with a new product-unveiling ceremony and over 300 in attendance.

The ceremony began with an invitation to attendees to “throw off the shackles of a single-fueled system – an electric platform is ‘adaptable’ – it becomes cleaner as you do, through the use of renewable wind, water and solar renewable power generation,” stated Vice President Micheal Austin as he challenged the status-quo of those promoting fossil fuels as a clean alternative.

With the showmanship one only expects at an international auto show, BYD opened the ceremony with an impressive display of lights, music, curtain-drops and a crowd of hundreds to witness America’s first electric articulated bus, fittingly named “The Lancaster” after the city in California where it was designed and manufactured.

The Lancaster eBus, a break-through, 60-foot, articulated battery-electric bus, can drive 170+ miles with a passenger load of up to 120 passengers, was in development for almost two years, and is an example of how committed BYD is to the American Rapid Transit markets.

Also on display at the BYD Exhibit was a 40-foot, Battery-electric Transit bus from Antelope Valley Transit Authority. AVTA Board Chairman Norm Hickling boasted that the 40-foot bus on the Expo show floor was the only bus that drove over 1500 zero-emission miles from Los Angeles all the way to Houston for the Expo under its own power.