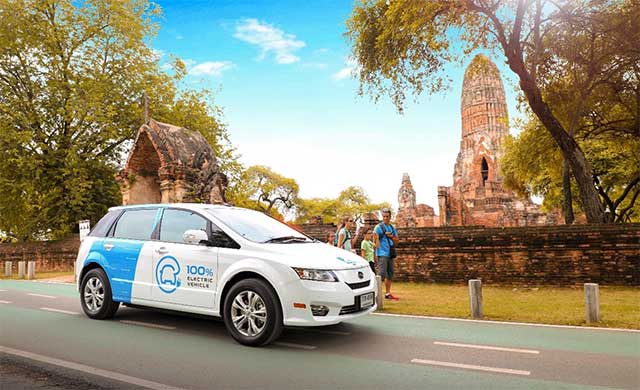 Chinese electric car manufacturer BYD announced that it has delivered 101 all-electric e6 cars to Bangkok. The company also said that it will supply another 1,000 electric cars very soon.

The agreement with Thailand to export an additional fleet of cars catapults BYD to the number one position in the country’s market for pure electric vehicles.

BYD has penetrated Asian markets with its environmentally friendly suite of electric vehicles which serve as popular modes of public transport. Bangkok’s new e6 fleet will be utilised as VIP taxis and as part of a car sharing service. The e6 is powered by BYD’s proprietary lithium iron phosphate battery which is renowned for being safe, stable, and fast charging. With just two hours of charging time, BYD cars are able to travel up to 400 kilometers.

Liu Xueliang general manager of BYD’s Asia-Pacific Automotive Sales Division said, “BYD is driving the transformation of electric mobility around the world. We are very pleased that Thailand has joined us.”

With over 100000 taxis and around 43000 buses traversing hundreds of kilometers daily between Bangkok and its surroundings, the area suffers from a high level of vehicle exhaust emissions.

“Electric vehicles are being adopted around the world because they are cleaner and less noisy compared to combustion engine vehicles,” said Sanit Promwong, the Director of the Land Transport Department of Thailand. “We ultimately want our people to have a better living environment.”

BYD vehicles have been present in Thailand since 2012 when the e6 was deployed as the official car for the country’s largest power company MEA. In addition, the e6 and the K9 electric bus was also adopted by the country’s leading industrial and commercial giant Loxley Group to kick start its ‘Thailand electrification strategy’. Shenzhen based BYD continues to improve its range of electric vehicles for private, public and industrial use as Thailand considers plans for the EEC, a low-carbon and technologically advanced zone.