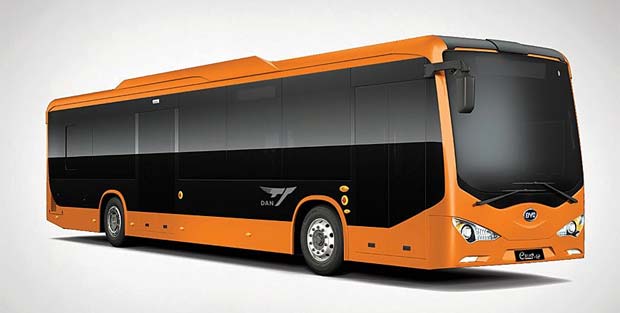 Dan Bus, the bus operator in Tel Aviv, is about to launch Israel’s cleanest bus fleet with the introduction of the Chinese BYD electric buses.

The aim of this trial is to replace approximately half of Dan Bus’s fleet, which now amounts to 1,300 buses and minibuses.

Investment in the importation of electric buses to Israel is expected to amount to hundreds of NIS millions in the near future, subject to how well electric buses will suit to the local operating conditions.

The importation of electric buses in Israel is highly supported and encouraged by various governmental ministries, headed by Israeli transportation minister, Mr. Israel Kats, who guided the ministry of Transportation to remove restrictions that may delay the process of importation.

The BYD electric bus is 12 meter long (40 feet). It is able to run 250 km (155 miles) on a single charge in urban conditions. The Fe battery (Iron Phosphate battery) fitted in the BYD electric bus boasts the highest safety, longest service life and most environmentally-friendly rechargeable chemistry and contains no heavy metals or toxic electrolytes.

The rear drive axle system integrates the wheel-hub drive and regenerative braking technologies. The AC charging system is BYD’s own newly developed technology for its electric vehicles. Since the AC charging system has a direct connection to the grid, it can not only charge the batteries but also transmit electricity into the grid from the batteries.

BYD electric buses are now in regular service and has been tested in several cities in China, Europe and North America, making BYD the largest electric bus manufacturer in the world. The accumulated mileage achieved for BYD electric buses by the end of July 2012 has reached over 8.23 million kilometers (or 5.1 million miles).