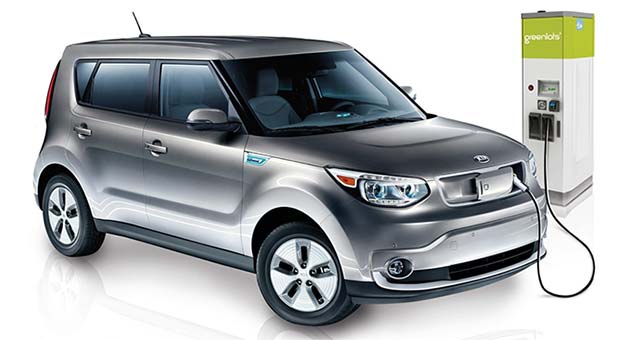 Greenlots, a global provider of open standards-based technology solutions for electric vehicle networks, is partnering with Kia Motors America (KMA) and ABB to offer DC fast-chargers at select Kia dealerships on the West Coast for the soon-to-launch 2015 Kia Soul EV.

Unveiled in February 2014 at the Chicago Auto Show and rolling out in the third quarter of 2014, the Kia Soul EV is the centerpiece of Kia’s Clean Mobility program, and bolsters KMA’s line of environmentally conscious vehicles offering drivers an alternative to gasoline-powered transportation.

The 2015 Soul EV is Kia’s first ever all-electric, zero-emissions car to be sold in the U.S. Beginning in the third quarter of 2014, Kia will roll out Greenlots’ SKY Smart Charging platform to its dealerships in California.

Select Soul EV dealers in Northern and Southern California will be fitted with multiple Level 2 240v chargers and ABB’s 50kW Terra 53 CJ DC fast charger, which can charge the Soul EV’s battery from empty to 80 percent in about 33 minutes, to help build range confidence. Soul EV owners can find EZCharge locations via Kia’s UVO EVServices app or the 8-inch touch screen inside the vehicle, and pay for charging with their Kia ChargeUp card.

Leveraging Greenlots’ open standards-based platform, top automakers like Kia can determine their own pricing models, while allowing drivers to roam across a variety of networks through EZ-Charge, a network of public charging stations. Pricing structures and incentives for the Kia Soul will be announced in conjunction with its 2015 model rollout in September.

On the heels of its partnership with BMW to provide charging technology for its newly launched i3 and i8 EVs, this announcement with Kia for the widely-anticipated 2015 Soul EV positions Greenlots as the go-to platform for EV success worldwide with charging networks in more than 13 countries across the globe.