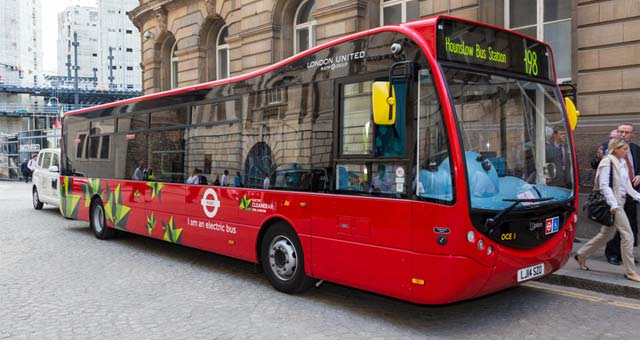 TfL has announced that it is to trial innovative technology that will enable diesel plug-in hybrid buses to wirelessly charge their batteries while they wait at bus stands.

The wireless charging technology will be trialled on up to four range-extended diesel electric hybrid buses in east London from next year.

The specially built hybrid double deck buses will operate on route 69 between CanningTown and Walthamstow bus stations. The Alexander Dennis Enviro400H E400 buses will be fitted with special technology enabling on-board batteries to receive a charge boost at bus stands at either end of the route.

By recharging at either end of the journey it is hoped that the buses will be able to work in electric mode alone for the majority of their operation time, so as to produce zero tailpipe emissions.

The trial will help TfL develop plans for greater use of electric buses in central London in the future, contributing to the Mayor’s vision of a central London Ultra Low Emission Zone.

TfL is leading a consortium of suppliers all working together to deliver and assess how the technology works in London. These include Alexander Dennis which is delivering the vehicles and IPT Technology which is supplying the bus station charging technology.

The introduction of this technology will complement the existing trial of six pure electric single deck buses, which represent the first step of the Mayor’s plan for all single deck buses in central London to be zero emission at tailpipe, as part of the world’s first Ultra Low Emission Zone, from 2020. A further two pure electric buses are expected to enter service later this year.

Around 800 hybrid buses now operate on the capital’s roads, including the New Routemasters, with more being introduced in a rolling programme. By 2016 there will be more than 1,700 hybrid buses in service on London’s streets representing 20% of the total bus fleet.

TfL has also recently completed an extensive retrofit programme of over 1,000 older buses which involves fitting them with an innovative system called Selective Catalytic Reduction (SCR), reducing emissions of harmful oxides of nitrogen (NOx) by up to 88%.