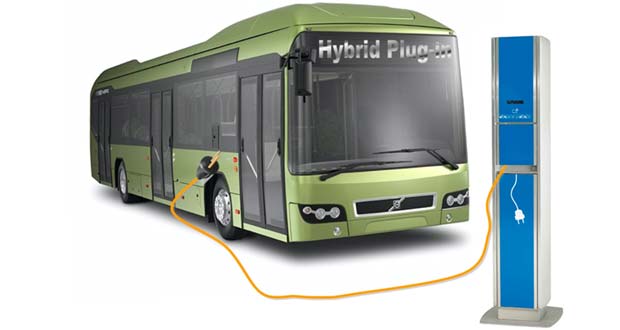 Volvo Buses is developing a plug-in hybrid bus that can drive long distances silently and exhaust-free on only electricity.

The plug-in hybrid bus, supported by authorities including the Swedish Energy Agency, is essentially the same Volvo hybrid bus as today, but equipped with a large battery pack and an on-board charging equipment.

The concept is based on placing battery charging stations at the end stations of the bus lines. By charging the battery there for five to ten minutes, it could significantly extend the time that the bus is able to operate only on electricity.

This could entail distances of up to ten kilometers (6.2 miles), with the corresponding advantages in the form of silent traffic with no local emissions. It can be controlled so that the bus operates on electricity in densely populated areas or in particularly sensitive environmental areas, while the diesel engine can be used on other parts of the route.

This technology will generate considerable opportunities to significantly reduce energy consumption. Volvo expects to reduce the energy consumption in a city bus by up to 65% compared with today’s diesel buses and CO2 emissions by more than 75%.

Volvo Buses expects to have a prototype bus ready for testing in 2011. The next step will be taken in autumn 2012, when a field test will commence in Gothenburg using three chargeable hybrid buses. The buses will be put in service with passengers.

The field test project will be implemented in cooperation with Business Region Göteborg, the Traffic Office in GothenburgCity, Västtrafik and Göteborgs Energi, which will be responsible for the charging stations.

The field test will commence in autumn 2012, but Volvo Buses does not know yet when the company will be able to offer this bus in the market.

Volvo currently has the world’s most efficient hybrid solution for buses and trucks. Volvo Buses has sold more than 250 hybrid buses, which are reducing fuel consumption by up to 35% and thus also reducing energy consumption and carbon-dioxide emissions by an equal amount.