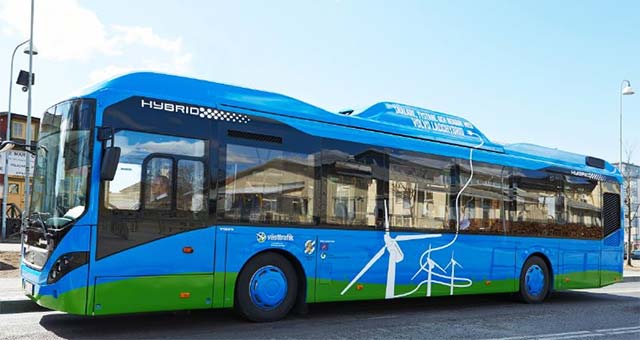 Tomorrow’s bus is already here – silent, cleaner and with dramatically lower fuel consumption. Volvo Buses’ new plug-in hybrid buses will hit the streets of Gothenburg, Sweden in May as part of a field test.

The innovative technology will facilitate a reduction in fuel consumption by a full 75% compared with current diesel buses.

With more than 1,000 hybrid buses sold, Volvo is world leading in terms of hybrid technology for heavy vehicles. Volvo is now taking another key step toward even more energy efficient and cleaner transport.

The plug-in technology will facilitate the reduction of fuel consumption and carbon dioxide by 75 to 80%, compared with current diesel buses. The total energy consumption will be reduced by approximately 60%.

Clean electricity operation entails silent driving and completely free from emissions. With this performance, combined with clean energy, Volvo Buses will be offering a sustainable alternative for urban transport.

The purpose of the field test is to study and verify the anticipated reductions in energy consumption and emissions, as well as to compile information from drivers, passengers and surrounding residents about their views on the properties of the bus.

Volvo Buses expect to be able to reduce emissions of carbon dioxide by up to 90% by using biodiesel instead of standard, fossil diesel oil in the combustion engine.

The plug-in hybrids are based on Volvo Buses’ sales success, the Volvo 7900 Hybrid. The plug-in hybrids have been further developed, and enable recharging from electricity grids via a collector installed on the roof. The plug-in buses have a larger battery package, making it possible to drive up to 70% of the distance, approximately 7 km at a time, quietly and free from emissions, using electricity. The batteries are charged at the bus terminus for between six and ten minutes.

Volvo Buses expects to commence commercial manufacturing of plug-in hybrids in a couple of years, and the technology is now to be tested in the three buses that will be put into service in Gothenburg. A demonstration project has also been planned for 2014 involving eight plug-in hybrids in Stockholm.

Should the operator have the need to put the bus in operation on a line with no charging stations, the plug-in hybrid will function exactly as current hybrid buses. In other words, the customer who wants to invest in the plug-in technology is able to do so without having access to a fully developed network of charging stations.

Volvo Buses participates in the plug-in-hybrid project in Gothenburg, in addition to Göteborg Energi, Business Region Göteborg, Trafikkontoret and Västtrafik. The project is partly financed by Life+, the EU’s financing program for environmental projects.

The Volvo Plug-in Hybrid Bus:
· The bus is equipped with an electric motor which is powered by a lithium-ion battery. It also has a 215 bhp 5-liter diesel engine.
· Charging is done from electricity grids via a collector installed on the roof of the bus. It takes 6-10 minutes.
· The bus will run approximately 7 km at a time on electricity only – silent and emission-free.