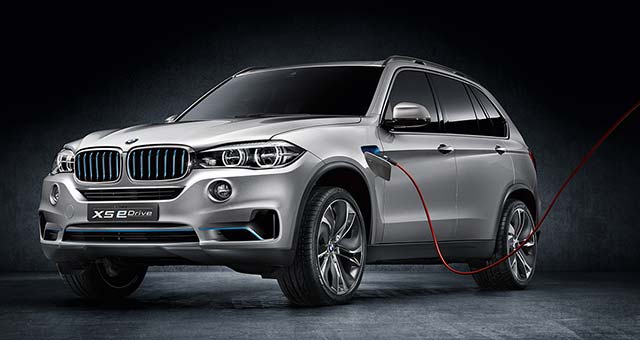 BMW is using the 2014 New York Auto Show  to present what it sees as the logical next step towards bringing about a radical reduction in fuel consumption and emissions in the SAV segment: the plug-in hybrid BMW Concept X5 eDrive.

The BMW Concept X5 eDrive succeeds in fusing the familiar brand of driving pleasure generated by the xDrive intelligent all-wheel-drive system and a luxurious ambience enshrined within an interior offering tremendous versatility of use with a plug-in hybrid drive system. A conventional combustion engine works together in perfect harmony with the cutting-edge BMW eDrive technology to produce the sporty drive for which the brand is renowned while operating with exceptional efficiency.

As a result, the car is able to drive on electric power alone at speeds of up to 75 mph and for a distance of up to approximately 20 miles, while recording average fuel efficiency figures of approximately 62 miles per gallon (US) in the EU test cycle. The BMW Concept X5 eDrive is able to complete the standard sprint from rest to 60 mph in under 7.0 seconds.

The BMW Concept X5 eDrive has undergone a series of detailed refinements in preparation for its appearance at the New Auto Show and is equipped with a drive system comprising a 245 hp four-cylinder gasoline engine with BMW TwinPower Turbo technology and a 95 hp electric motor. The motor is supplied with power from a lithium-ion battery that can be charged from any domestic socket and has sufficient capacity to enable all-electric driving with zero local emissions for a range of up to approximately 20 miles.

To ensure a particularly high level of crash safety, the high-voltage battery developed for the BMW Concept X5 eDrive has been housed underneath the luggage compartment, whose load capacity remains virtually unchanged as a result.

Various drive system and driving modes are available to suit requirements and the situation in hand. The familiar COMFORT, SPORT and ECO PRO modes can be selected with the Driving Experience Control switch, allowing the intelligent hybrid drive system to be fine-tuned to produce the desired balance between sportiness and efficiency. What’s more, two further drive system modes can be activated at the push of a button as an alternative to the AUTO eDrive setting: MAX eDrive for driving solely on electric power in city traffic and SAVE Battery for maintaining the current battery charge.

Thanks to the BMW eDrive technology that has been developed specifically for this model, the concept car brings a whole new brand of poise and assurance to the SAV segment. The formidable power reserves produced by its duo of drive units, its outstanding levels of motoring comfort and the optimised traction, handling stability and dynamic performance qualities over any terrain courtesy of BMW xDrive technology endow it with the all-round sporty prowess typically associated with BMW X models, while its landmark efficiency blazes a trail for its rivals to follow. The ability to operate purely on electric power with zero local emissions, especially in city traffic, puts a whole new slant on the SAV driving experience that shows the shape of things to come. At the same time, the plug-in hybrid drive concept does not impinge in any way on the exemplary versatility offered by the Sports Activity Vehicle’s interior or its wonderfully luxurious ambience. In short, the BMW Concept X5 eDrive shows itself to be supremely talented in every way, deftly bringing major advances in cutting fuel consumption and emissions into harmony with state-of-the-art functionality and everyday practicality that never fails to impress.

A number of understated styling touches have been meticulously incorporated into the exterior design to underline the groundbreaking character of the BMW Concept X5 eDrive. The kidney grille bars, air intake bars and the insert in the rear bumper are all finished in the BMW i Blue colour developed for the BMW i brand, for instance, creating a contrast to the Silverflake metallic exterior paintwork.

The BMW Concept X5 eDrive also comes with body-colored wheel arches, specially styled roof rails, a connector for the charging cable that lights up during charging, as well as 21-inch light-alloy wheels in an exclusive, streamlined design.

Electrification of the powertrain allows BMW to unlock tremendous potential for reducing fuel consumption and emissions. The BMW eDrive technology developed for this purpose comes in various versions, each precisely tailored to the particular vehicle concept. Both the BMW i3, the first all-electric production vehicle from the BMW Group, and the soon-to-be-launched BMW i8 plug-in hybrid sports car are powered by BMW eDrive technology.

The BMW Concept X5 eDrive now follows in the tracks of the BMW Concept Active Tourer, seen last year at NYIAS, by demonstrating how model-specific BMW eDrive technology can be employed in plug-in hybrid models from the BMW core brand.