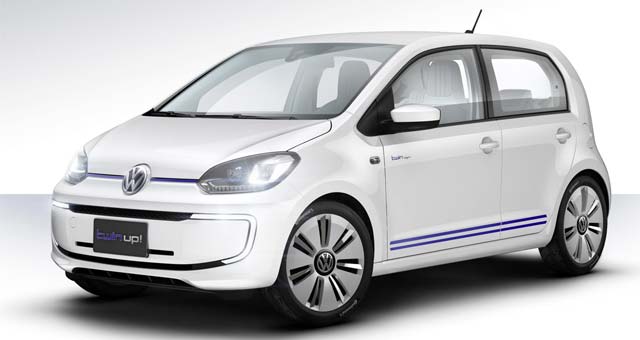 Volkswagen has unveiled a plug-in hybrid version of its up! city car at the Tokyo Motor Show — the Volkswagen twin-up!.

The twin-up! concept car uses a 0.8-litre two-cylinder turbodiesel engine in series with a 27 kW electric motor and a seven-speed DSG gearbox – a version of the drivetrain found in the pioneering XL1 – and offers combined fuel consumption of 256.8 mpg.

All new Volkswagen vehicles are deigned to accept alternative power trains as well as conventional ones, so only minor modifications (such as lengthening the front overhang by 30 mm) were necessary to fit the plug-in hybrid drivetrain into the four-seat twin-up!.

The twin-up!’s diesel engine and electric motor each produce up to 35 kW, while the maximum system power output of the twin-up!’s front-mounted drivetrain is 55 kW.  The 8.6 kWh lithium-ion battery pack, 12 V battery and 33-litre fuel tank are all located between the rear seats and the boot.

Good aerodynamics (0.30 Cd), a low unladen weight (1,205 kg) despite the addition of the lithium-ion batteries and 165/65 R15 tyres optimised for low rolling resistance all help to maximise the twin-up!’s efficiency, and to achieve the 256.8 mpg combined fuel consumption figure and 27 g/km CO2 emissions.

A decoupling clutch between the diesel and electric motors allows the electric motor to operate independently.  Provided that there is sufficient battery charge, the driver can press the e-mode button for emissions-free driving.

Externally, the twin-up! follows design cues familiar from the all-electric e-up! model, and also includes flowing blue double stripes above the sills.  The main paint colour is ‘Sparkling White’, which includes blue flakes that create a spectacular changing pattern.  The interior is dominated by an off-white ‘Ceramic’ colour, with a fabric and leather combination upholstery featuring blue piping and reflective strips on the seats’ centre panels.

The instrument panel is bespoke, and all instrumentation is digital.  The visual image and content of the instruments change according to the vehicle’s driving mode (hybrid or all-electric).  In hybrid mode the accents are white, while in pure electric mode they are blue.

The central infotainment screen is configurable by the user, while for the first time in a Volkswagen the automatic climate controls below are exclusively digital.  This innovative concept uses Active Matrix Organic LED (AMOLED) displays.[wzslider height=”400″ lightbox=”true”]