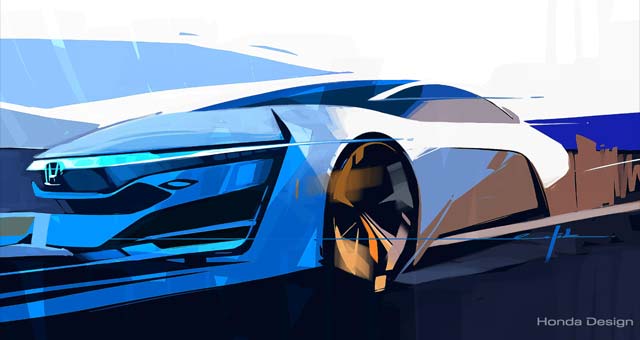 Honda has released a sketch of the Honda FCEV Concept in advance of its world debut at the 2013 Los Angeles Auto Show on 20th November.

The Honda FCEV Concept expresses a potential styling direction for Honda’s next-generation fuel-cell electric vehicle (FCEV) launching in the U.S and Japan in 2015 and later in Europe.

“The Honda FCEV Concept demonstrates the company’s vision for the future of personal mobility and our commitment to developing advanced alternative fuel vehicles,” said Mike Accavitti, senior vice president of American Honda Motor Co., Inc. “As we work toward the introduction of our next-generation fuel-cell vehicle in 2015, our long-term experience with fuel-cell technologies will help us pave a way towards a zero-emissions future.”

Today, around two dozen customers are driving the FCX Clarity – enjoying the benefits of driving this advanced technology vehicle, while also contributing valuable experience, helping Honda to advance fuel-cell technology for the future.

Further details about the Honda FCEV Concept will be revealed on 20th November 2013 at 22:35 CET at the Los Angeles Auto Show.