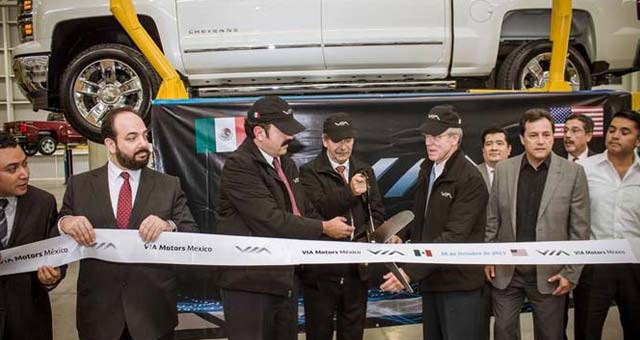 VIA Motors has launched high volume assembly of its electrified vehicle lineup at a new plant in San Luis Potosi, Mexico.

The Governor, Dr. Fernando Toranzo, officiated at the ceremony along with VIA Motors president Alan Perriton, and Pablo Acedo, president of VIA Motors Latin America (VMLM).

The new facility is located in a free trade zone near several major automakers and suppliers. New vehicles are transported from the General Motors production facility in Silao, to VIA’s assembly plant in nearby San Luis Potosi, where they are transformed into electric vehicles by integrating VIA’s proprietary extended range electric power train.

The facility employs a conveyor-scissor lift system that moves conventional vehicles through 8 assembly stations where technicians raise or lower the vehicle at each station to install electric and other components.

The new facility is adjacent to the NAFTA highway and Kansas City Southern Rail line (KCS) for easy transport to the U.S. and Canada.