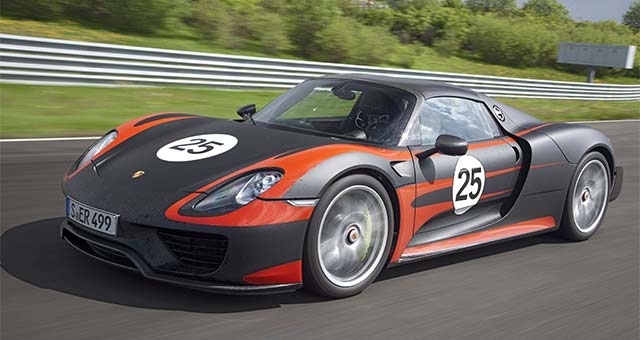 The Porsche 918 Spyder is celebrating its debut in a production form at the 2013 Frankfurt Motor Show.

The Porsche 918 Spyder plug-in hybrid sports car is not only a technology pioneer but also marks the beginning of a new era for sports car manufacturing.

In setting this technological benchmark, the Porsche 918 Spyder is taking on a pioneering role similar to that of the 911 when it was first unveiled at the Frankfurt Motor Show 50 years ago. Appropriately, in honour of this anniversary, Porsche is presenting the limited edition “50 years 911” model. Based on the 911 Carrera S, this latest version of the iconic coupe combines traditional 911 features with state-of-the-art technology. On the subject of icons, Porsche is completing its line-up of sports cars at Frankfurt with the public unveiling of the new 911 Turbo – which, in turn, is 40 years after the turbocharged 911 was first shown.

The 918 Spyder is the continuation of the traditional Porsche DNA in a ground-breaking sports car concept. Designed from the start to be a high-performance hybrid, the 918 Spyder boasts an unprecedented combination of performance (offering the 887 hp output of a super sports car) and the virtually silent motion of an electric vehicle. The vehicle is able to accelerate from 0 – 62 mph in 2.8 seconds and offers an average standard fuel consumption of between 94 mpg and 85 mpg. The 918 Spyder also allows a combustion engine to be combined with an electric motor-based drive to further optimise the dynamic performance of the vehicle.

Porsche’s 918 Spyder plug-in hybrid supercar will have a starting price of $845,000, excluding destination and handling fees, when it goes on sale later this year in the US. The 918 Spyder with the Weissach package, which will lighten the car by 34kg, removing the entertainment system, air conditioning, door storage and armrests  is $929,000.