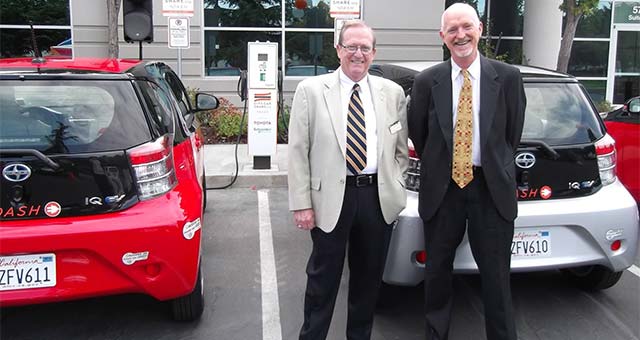 As part of the pilot program, Toyota is providing thirty iQ EVs to City CarShare’s Dash fleet (there are only 100 of these models in the world.) These vehicles will be located in various electric vehicle charging stations throughout and near Hacienda in Pleasanton.

City CarShare’s Dash will provide battery powered transportation options to the nearly 20 percent of the Park’s employees that use alternative transportation methods to get to work.

The Scion iQ EVs will allow employees to attend local meetings and run errands. Dash’s launch at Hacienda will also encourage single-car commuters to use public transit and / or join a carpool / vanpool and become carsharing members. Employees who join City CarShare will be able to use the electric vehicles by the hour for a low cost.

The Scion iQ EVs feature a high-output lithium-ion battery system that delivers an electric power consumption rate of 104 Wh/km in an ultra-compact package. In ideal stop-and-go driving conditions, the 12-kWh battery provides a range of about 40 miles and can be fully charged in about three hours. The battery electric four-seater vehicles do not consume gasoline or produce tailpipe emissions.

The Dash fleet will offer multiple benefits, such as reducing road congestion by encouraging carpooling and replacing short trips made by gasoline vehicles during the workday – trips that produce the most harmful “start-up” emissions. City CarShare members have saved a total of 487 million pounds of CO2 since the organization launched in 2001. Additionally, each Dash vehicle will contribute to City CarShare’s goal of reducing congestion and carbon emissions throughout the Bay Area.