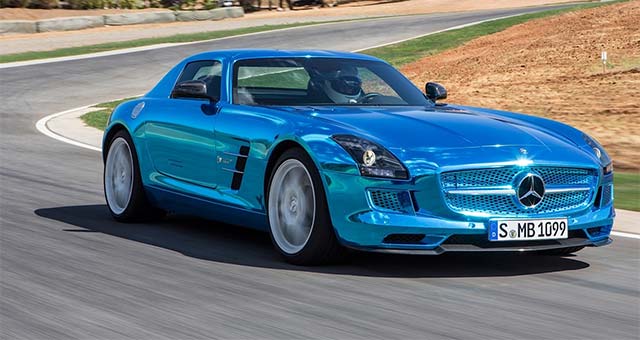 The Mercedes-Benz SLS AMG Coupe Electric Drive and the Mercedes‑Benz B-Class F-CELL have won the German eCar Award for the second time after 2012.

The eCar Award 2013 for the best design of a standard-production electric car went to the Mercedes-Benz SLS AMG Coupe Electric Drive, while the B-Class F-Cell won the best overall concept award in the “concept vehicles” category.

This was decided by 13,338 readers of the car magazines “Auto Bild” and “Auto Test” in an online poll.

This was the fourth time this year that the car magazines “Auto Bild” and “Auto Test” picked out the best and most beautiful electric cars.

However, the “fascinating” gull-wing model offers not only a breathtaking design. It is also the most powerful and fastest electrically driven standard-production vehicle in the world. The high-performance vehicle has four electric motors producing a total output of 552 kW (751 hp) and a maximum torque of 1000 Newton-metres. This enables the SLS AMG Coupe Electric Drive to accelerate from zero to 100 km/h (0-62 mph) in 3.9 seconds. The electronically limited top speed is 250 km/h (155 mph).

The first passenger car to feature a fuel cell drive, the B-Class F-CELL repeated its 2012 success by also winning this year’s eCar Award. The B-Class generates the power for its electric drive from the chemical reaction between hydrogen and oxygen. This produces no pollutant emissions. The only thing to come out of the exhaust during driving is water vapour. The tank takes three minutes to fill with hydrogen for a range of 400 kilometers (about 250 miles). Driving pleasure and dynamism on a par with that of a 2.0-liter petrol engine is provided by a 100 kW (136 hp) electric motor. Converted to diesel equivalent, the NEDC consumption is just 3.3 liters of fuel per 100 kilometers (71 mpg US).

The Mercedes-Benz B-Class F-CELL is Mercedes-Benz’s first series-produced electric vehicle with a fuel cell drive. Around 200 vehicles of this model have been sold since 2010 to customers in the USA and Europe.[wzslider height=”400″ lightbox=”true”]