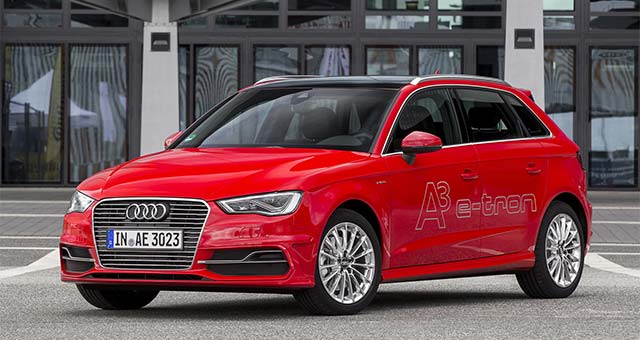 The Audi A3 Sportback e-tron plug-in-hybrid will go on sale from 2014 and is a genuine Audi with top sporty performance.

Thanks to the ultra lightweight construction philosophy of Audi, the A3 Sportback e-tron complete with all electrical components weighs less than 1,580 kilo-grams (3,483.30 lb), with space for five occupants and plenty of cargo. It comes complete with all the brand’s strengths – elegant design, sporty chassis, top-notch ergonomics, excellent build quality and an extensive choice of high-end assistance and infotainment systems.

The 1.4 TFSI combustion engine is one of the most modern power units of Audi. Inside the engine compartment, looking in the direction of travel, it is positioned a few centimeters further to the right than usual, to create space for the high-voltage components. Its crankcase is made from diecast aluminum, weighing little more than 100 kilograms (220.46 lb).

The four-cylinder engine is state of the art in every respect – its low frictional losses, its turbocharger, its intercooler and its thermal management. One special feature is the way the exhaust manifold is integrated into the cylinder head. After a cold start, it brings the coolant swiftly up to operating temperature. At high loads the water jacket lowers the temperature of the exhaust gas.

Thanks to the high electric range of up to 50 kilometers (31.07 miles), many customers will only rarely experience the gasoline engine of the Audi A3 e-tron in action.

The electric motor is a permanently excited synchronous machine. It weighs 34 kilograms (74.96 lb) and is liquid-cooled via a cooling jacket in the stator. The electric motor is located between the engine’s dual-mass flywheel and the newly developed separating clutch, the K0 clutch. When the TFSI starts, it is tow-started by the electric motor via the clutch. As soon as the former has achieved the same speed as the electric motor, the clutch is opened. This smooth, highly precise process takes place within half a second.

An elaborate liquid cooling system ensures that the battery is kept within a suitable temperature range during operation. Drivers of the Audi A3 Sportback e-tron will be able to start electrically in hot summer conditions and at sub-zero winter temperatures alike. Four cooling plates regulate the temperature of the high-voltage battery’s eight modules. The cooling system represents a separate low-temperature circuit in the car and runs on a separate cooler housed in the engine compartment. If need be, it can be connected to the air conditioning system and even divided into two subsidiary circuits.

In the event of a crash sufficiently severe to trigger the belt tensioners or airbags, the entire system is disconnected from the power supply. The flat-shaped battery is installed under the rear bench seat – an area where the high-strength and ultra-high-strength steel components of the occupant cell form an especially strong structure. Its housing and interior structure are equally of a very sturdy design.

The 12-volt battery for the low-voltage consumers and the 40-liter (10.57 US gallons) fuel tank are located above the rear axle. Both components barely impinge on the trunk of the A3 e-tron – in the standard configuration it measures 280 liters (9.89 cubic ft) and 1,120 liters (39.55 cubic ft) with the rear seat backs down.

For easy use at home, the charging lead can be clipped into a wall-mounted holder. Even this holder has an Audi design, and as well as being a convenient way to store and use the lead, it is lockable. The charging equipment is thus protected against theft even when kept outdoors.

The charging lead supplies the car with alternating current from the grid via the charging connection, which is in the Singleframe grille behind the fold-out four rings. As well as a status LED, the unit includes two pushbuttons allowing the user to choose between timer-controlled charging and immediate charging. In the car, the alternating current fed in by the charger is converted into direct current for the battery.

From an industrial power socket, it takes slightly more than two hours to charge the battery fully. From a normal domestic power socket in Europe, the charging process takes about three hours and 45 minutes. Audi is working intensively on a joint project with a supplier of renewable power, because electric driving only makes ecological sense if such power is available.

Another medium-term project of Audi is automatic charging without physical contacts, referred to as Audi wireless charging. Here the charging process involves an alternating magnetic field between the stationary charging pad on the ground and the mobile charging pad in the car, similar to the principle used by an electric toothbrush.

The power electronics, located in the engine compartment, then convert the stored direct current into three-phase current for the electric motor. It has six high-performance transistors for this task. The power electronics, which include a DC/DC converter for connecting up the vehicle’s 12-volt electrical system, are compact and light in weight. They have a total volume of 8 liters (0.28 cubic ft) and weigh 10 kilograms (22.05 lb). Together with the charger, it is incorporated into the same cooling circuit as the traction battery.

The hybrid management is configured to function in harmony with the electric motor. Up to medium loads the electric motor, now functioning as alternator, largely handles retardation. The energy that it recovers is fed into the traction battery. The wheel brakes only become active if the driver presses the pedal more forcefully.

Braking recuperation is just one of several operating statuses of the Audi A3 e-tron. The car is almost always started electrically, even at very low temperatures, in extremely hot conditions or when battery charge is very low. The electric motor’s high torque enables the sporty compact car to accelerate away powerfully. It goes from 0 to 60 km/h (37.28 mph) in 4.9 seconds – with quiet but forceful propulsion.

In the electric mode the Audi A3 Sportback e-tron can travel at up to 130 km/h (80.78 mph) – it could go faster, but that would not be efficient. When traveling at a constant 100 km/h (62.14 mph), generally only the electric motor is active provided there is sufficient energy in the battery. As soon as the driver steps hard on the accelerator, for instance to overtake, it prompts the TFSI to cut in via the K0 separating clutch. In the boost mode the Audi A3 e-tron accelerates with all of 350 Nm torque (258.15 lb-ft).

When the driver releases the accelerator at high speed, the hybrid management enters the gliding mode. Now both drives are entirely deactivated and are no longer developing braking torque. When stepping off the accelerator at medium and low speeds, the system recovers energy through coasting recuperation; braking recuperation then becomes active when the brake pedal is pressed, except if a full brake application is needed.

The driver has several ways of actively managing the vehicle’s response. They can choose from three programs using a button in the driving area and the e-S tronic selector lever. The EV characteristic map gives priority to electric drive, whereas the Audi A3 e-tron behaves very sportily in the S program. The hybrid hold mode can be selected via a menu in the MMI. This mode preserves the electrical energy stored in the battery for later use. In addition, the driver can specify detailed settings in the Audi drive select control system. Different stages of coasting recuperation are permanently assigned to the individual Audi drive select modes. Within certain ranges, this enables the driver to influence how the battery is charged while on the move.

The Audi A3 e-tron displays supply precise information about the driveline status. The powermeter in the instrument cluster shows the system’s overall output, as well as the status of the driveline and the battery charge. The monitor for the MMI navigation plus shows the energy flows in the hybrid system. In addition, the driver information system displays the operating ranges and consumption figures for electricity and gasoline.

Under the Audi connect umbrella Audi is currently developing an entire portfolio of innovative online services for the A3 e-tron. Drivers can use these to monitor and manage a wide range of functions via their iOS or android smartphone or via a web portal.