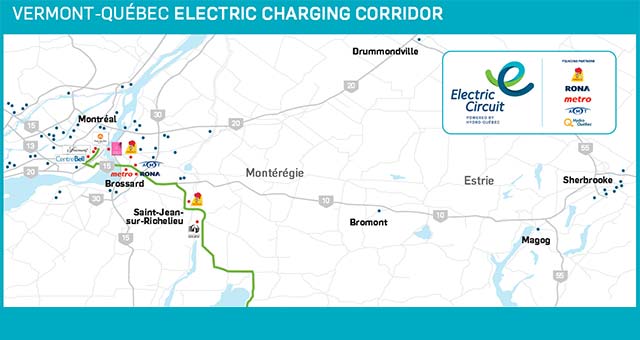 The long distances often involved in travelling across North America will pose no challenge to electric vehicle users in Vermont and Quebec, following the installation of a 138-mile (222km) charging corridor between Burlington and Montreal.

Scheduled to open this autumn, the corridor between the largest cities in Vermont and Quebec consists of 17 charging stations positioned at strategic points along the I-89, Highway A-10, Rte 104 and Rte 133.

In addition, several other charging stations are present in the vicinity. It will give EV drivers the possibility of recharging their battery during their journeys, thus providing the autonomy they need to make long trips. A website will be launched to allow drivers to locate the nearest charging station.

This initiative is the result of an agreement between Drive Electric Vermont, a coalition that promotes electric transport in the American state, and Electric Circuit, the organisation responsible for rolling out an EV charging infrastructure in Quebec.

In the near future, the objective is to add extra charging stations to the corridor. Plans are also underway to extend the scheme to other cross-border routes, including Magog-Sherbrooke-St. Johnsbury.

For a visual insight on how the corridor works, check out this map (pdf), which outlines the various charging stations present in the corridor.